Ain’t Too Proud to Beg 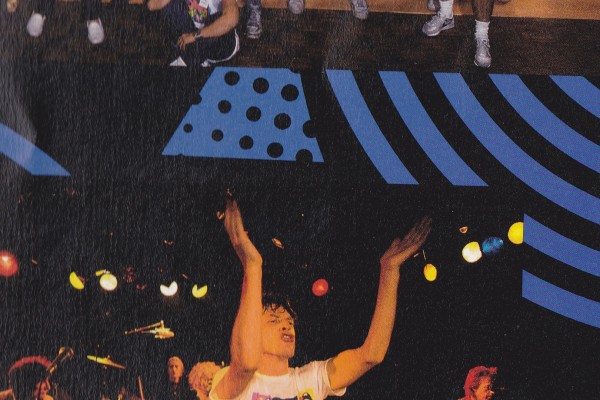 I know this is a long story, but I think the details of my personal experience are worthwhile for anyone interested in this event in Stones history.

To some Stones historians, this period in 1989 marks beginning of the “modern” Rolling Stones era of live performance; expanded band with music and staging spectacles filling huge stadium and arenas around the world. However, the dream of every lifelong Stones fan is to see the band in a small club setting.

I finally lived my dream in 1989. Although it’s been many years, the details and emotions I recall here are fresh, having been excerpted directly from my personal Steel Wheels tour diary (I attended 13 1989 US gigs, ending with the three last shows in Atlantic City).

During the summer of 1989 there had been no live Rolling Stones performances in the US for nearly 8 years. I attended the last shows in Hampton, Virginia and, like all my Stones fan friends, had endured a period of extended deprivation. Hard to imagine now, but there was no internet or cell phones and we relied on a network among a small group of long time East Coast US fans, some with inside contacts.

Excitement grew as we passed rumors of the band rehearsing for their upcoming “reunion” tour at a secret location in suburban Connecticut.  About 3:30 PM on Saturday August 12th I got the call at my Philly home from a close friend and fellow collector, Mr. D, telling me that a surprise gig was set for that night at a small club in New Haven, called Toad’s Place.  I confirmed details from friends in New York and called the club for directions.

At this late hour, I was skeptical of our chances to make it before it sold out, but we had to try. I jumped in the car and picked up Mr. D about 4:30 and headed north out of Philadelphia on the New Jersey Turnpike in a drenching rainstorm.

During the drive we fought the urge to become too excited because of the likelihood of a painful disappointment. The gas pedal was jammed whenever possible and we could barely keep from screaming with anxiety when we hit a massive traffic jam entering NYC at the George Washington Bridge.

Panicking, I drove the car over a low median barrier to get to a faster moving lane and zoomed north out of Manhattan.  It was getting late now and our only hope was that secrecy had been maintained and all of the New York area Stones fans weren’t already there ahead of us.

We arrived in New Haven about 8:45 and our worst fears emerged as we saw the size of the crowd milling around the neighborhood outside the club. Someone came up to the car window and delivered the bad news that only people on the guest list were being allowed in the door.

Apparently, if we’d arrived by 8:00, we would have been admitted with the regular bar crowd who thought it was a typical evening with a DJ and three dollar cover charge. The line at the door was hopelessly stalled, consisting of fans like us who weren’t on the guest list and were praying for some last minute opportunity. 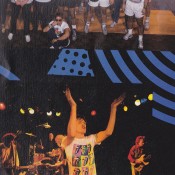 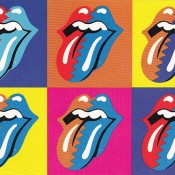 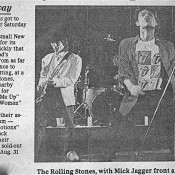 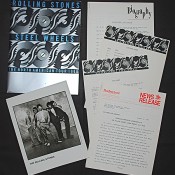 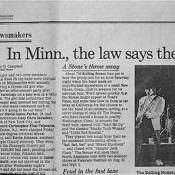 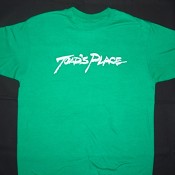 We checked out the rear entrance and attempted to drop a few names with the security crew, but failed. It looked increasingly bleak as reality began to set in with the prospect of a long sad ride home.

Returning to the line in front, we met two NYC buddies, video archivist James Karnbach and journalist Bill German, who had just arrived and were checking out the scene. They both usually had pretty decent Stones connections, so we pushed up to the head of the line with them and tried to act like we belonged there.

We morosely watched a group of well-dressed record company types hop out of limos and go inside. They sure didn’t look like diehard Stones fans to me. Just then, longtime friend of the band, Freddy Sessler shows up and James shoves our pal Mr. D into the door behind him announcing “He’s Freddy’s guest!”.

Then James got in with Freddy too. Bill gave his name to the girl with the guest clipboard. He was surprised to learn that he had been left off the guest list, despite his connections. We sulked and schemed some more (Bill did get in later). Mr. D. had now been inside for about 15 minutes and I was terribly jealous and desperate to try anything.

There is nothing worse than standing helplessly outside the venue when you know the boys are about to be playing inside. It was every man for himself at this point and the situation called for some desperate Stones fan strategy (and luck).

One of my standard Stones tour tactics was to become listed as a member of the press with the Stones’ public relations firm. This year I had signed up with their firm in New York, and had already received the collectable “Steel Wheels” press kit. So I went up to the gatekeeper girl with the clipboard and claimed I was with the PR company, using the names of people that worked at the firm. She seemed to regard me seriously and let me hang by the door as she dealt with more newly arriving “guests”.

While she was distracted with the new arrivals I twisted to sneak a sideways glance at her clipboard and, reading upside down, looked for a name I could use. I settled on one and as she turned back to face me I said, “look, I might be listed under Mottola”. She scanned the list, found the name, looked up at me, and said “Tommy?” I said “yeah”. She nodded, crossed off the name and I scrambled inside (no i.d’s, wristbands or hand stamps needed then). I later learned that Tommy Mottola was a music business executive, President of Columbia Records, eventually marrying and divorcing Mariah Carey.

Once inside, I immediately tried to lose myself in the crowd for fear that the real Tommy Mottola might arrive at any minute and have me viciously ejected. I allowed myself a quiet whoop for joy as it began to sink in that I had finally made it into a Stones club show! My only remorse was the friends still out on the sidewalk with little or no chance of gaining entrance, although I would learn later that they both got in.

It was about 9:30 now and a local band was on stage doing cover songs. I went over to a rear bar, bought a Toad’s Place T-Shirt (good for smug gloating while worn at future “Steel Wheels” shows) and had a drink to calm my nerves. My heart was pounding and I wanted to slow time and savor every moment.

I was in no real hurry for the Stones to take the stage as I enjoyed basking in the anticipation of what I was about to see; thinking about the long wait since the closing bows at the final Hampton, Virginia, show in December 1981. [See Marilou Regan’s great book “Love You Live, Rolling Stones: Fanfare from the Common Fan” for our excellent adventure crashing Keith’s birthday party in Hampton].

When the opening act had finished, I staked out a position in the packed mob about 15 feet in front of the stage and continued reminiscing about all my travels over the years to see the Stones perform, and my ultimate wish to see them play in a small club setting. I was feeling rewarded for my years of loyalty.

If there is a Rock ‘n Roll God, he was smiling on me now. I had worshipped and sacrificed at the altar since I was 10 years old and first heard “Not Fade Away” on my tiny transistor radio, tucked under my pillow while my parents thought I slept. I was also quite annoyed at the many local college kids who got lucky that night and did not earn the right to be there.

The Show: I was standing there defending my turf for about 30 minutes when the lights came down, the crowd surged and began to howl and whistle. At 10:35 the band walks on stage one by one and plugs in. Somebody announces, “The Rolling Stones”, and they launch into “Start Me Up”. The mix is murky and the opening chords seem buried but the overall effect is incredible; just to see that the gig is a reality.

I am there, and the Stones are playing in my face. The stage is low and I can only see them from the waist up, viewed over the shoulders of the fans in front. Next is “Bitch”, my biggest surprise of the night, not played live since 1972-3. The sound has kicked in crisply now. Horns seem to be coming from somewhere, maybe keyboards, but not visible.

Mick has on a bright blue coat and a tour T-shirt with the zig-zag tongues designed by Andy Warhol. He dances with lots of energy (for a guy in his mid-40’s, ha-ha), tightly confined to the small stage. “Tumbling Dice” follows and I see a trio of back-up singers for the first time. Next “Sad Sad Sad”, a new song I never heard before with screeching runaway three guitar jangle. “Miss You” follows, mercifully short and streamlined with more swing than in 1981. “Little Red Rooster”, a rarity done in classic blues style leads into a rollicking “Honky Tonk Women”.

Next, we are treated to the first public performance of the new single “Mixed Emotions (not even on the radio yet). It has a buzz-saw guitar sound reminding me of Keith’s recent solo track “Take It So Hard”, building to a classic Stones ending climax. Ronnie and Keith (red coat and sleeveless black T-shirt) seem serious and subdued as they concentrate on their playing, especially on the new numbers. “”It’s Only Rock ’n Roll” follows and it’s a great crowd pleaser. We haven’t heard that one live since ‘75-’76; maybe the hottest song of the night. (Nobody cared about too many old “warhorse” songs back then).

I complete my ascent into heaven as Keith strokes the opening chords of “Brown Sugar”. Houseboy knows he’s doin’ alright! Charlie’s kicking’ ass with a really sharp snare sound, looking older than I expected. Bill just stands in the same place and smirks the entire time while laying down the bottom rumble. They finish with “Jumping Jack Flash”, starting with the extended guitar intro that was used on the studio recording.

Now Keith is really showing his trademark moves on the small stage as they finish with a throbbing frenzy of guitars and drums. They all leave the stage after Mick announces “We gotta go home and work on some bridges”, referring to tightening the musical shifts between verse and chorus. Yeah, they made a few mistakes. Who cares?

The entire performance lasted 55 minutes and, no matter how hard I tried to focus my senses and absorb every note and nuance, it seemed to be over in a flash. After the band left and it was obvious there would be no encore, I wandered back to the bar to find the few friends who made it inside. All we could do was shake our heads and grin. The long wait was over. More shows to come.

Mr. D and I drove back to Philly on pure adrenaline, talking and listening to the tape he made of the show. By 4:00 AM I was lying in my own bed, next to my oblivious wife and four-month old son (he’s an adult now and has seen one of the “Forty Licks” shows with me).

I drifted off thinking about the upcoming “Steel Wheels” tour and how I might actually be able to put up with gigantic stadium shows for a while. I always wondered if Tommy Mottola had any trouble getting into Toad’s Place that night. If he did, he can now understand why.