Till the Next Goodbye 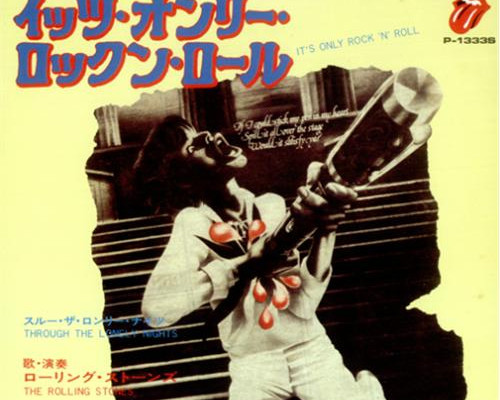 Suicide is pervasive in rock ‘n’ roll music with over 100 songs written about it. But when it affects you personally, you find that it’s nothing to sing about.
Unless you’re the incomparable Mick Jagger.

Mick had the inner strength to go back on stage just two months after the suicide of his lover, L’Wren Scott, and sing his heart out to the campy, cocky, and now haunting lyrics from It’s Only Rock ‘n’ Roll: “ If I could stick a knife in my heart / suicide right on the stage”.

Mick’s ability to carry on with grace in the public eye this past year has been remarkable, but on the anniversary of L’Wren’s death, March 17, he must surely have faced a very difficult, self-reflective time. Survivors of suicide loss are often paralyzed with pain and self-blame, as if we are responsible for our loved one’s suicide, that somehow we could have prevented it. Those feelings must surely have been felt by Mick.

And we Rolling Stones fans have surely felt Mick’s pain and suffered his loss with him, which is lovely consolation in a society that attaches a terrible stigma to suicide. Untreated depression is the number one cause for suicide, yet many believe that it is a shameful and sinful choice, and they often blame the bereaved instead of offering sympathy and compassion.

And here’s where Mick Jagger is, once again, a catalyst for the new normal — he garnered an amazing outpouring of support and sympathy from family, friends, business associates, even strangers. While it’s an unfathomable mission leaving unanswerable questions, L’Wren’s death by hanging herself from a door knob in her Manhattan apartment had an unexpected positive outcome – it opened up the suicide dialogue to the trifecta of the zeitgeist: fashion, film and music.

Suicide needs to be branded as a societal scourge in order for change to happen. There were over 800,000 yearly suicides worldwide, as reported by the World Health Organization in 2014. WHO director general Margaret Chan said their report was a “call for action to address a large public health problem which has been shrouded in taboo for far too long.”

Remembering L’Wren, and shattering a taboo, I would like to speak to the death of one extraordinary lady who showed us all how to be a true Rolling Stones fan. While I won’t mention her name, many fans know who she was, and many wondered how she died. I want to pay tribute to her memory and help alter the culture of shame by addressing her life and how it ended.

“The Queen of the Stones Fans” is an undisputed, unsurpassed rock ‘n’ roll fan legend. Queenie was a super-duper superfan who seemed to magically attend over 500 Rolling Stones shows since 1994. She saw nearly every concert the band played in every far and away country on the planet for these past 20 years.

As magical as it sounds for a superfan to constantly drink at the altar of her gods, it wasn’t just magic. It was also hard work, time and money. And it was Queenie’s dedication and commitment, which often put her on buses, trains, planes and hitched-rides – often for days at a time — criss-crossing countries to be with the Rolling Stones.

In the early years, Queenie often arrived on the scene alone and with no place to stay. Stones magic helped her find shelter with other fans she met along the way, making deep, life-long friendships. She had friends from home she sometimes traveled with too. She was well-loved and would rendezvous with superfans all over the world who became like family.

She represented all of us, but on an exalted level as the über-fan who kept it real with her unquestionable true love of our band and their music. At ground level, she could bare witness from the authentic female perspective. And with the sweet, lovely demeanor of a regal, royal, rock Queen, she made us all feel welcomed in her ever-presence.

Queenie was ubiquitous at Stones-related events, from rehearsals, to solo shows, and press conferences to movie debuts. She even flew in from Japan to see a few NYC shows based on (strong) rumors that a band member might join another headliner. And Queenie would often be found at rock and blues shows of various top artists all over the world.

Whether holding court in the concert queue, the venue, the hotel, or in the bar after the show, Queenie always presented (a façade?) as a happy, sparkly superfan. Her throne in the front row at Stones concerts was a validation of where she belonged. She earned – and deserved – every hard-to-come-by-and-scarce privilege and favor, like rehearsals, access, and parties, and no one could ever be jealous or begrudge her that joy.

And she orchestrated astounding adventures on her own; it’s widely known that the Rolling Stones do not largely support or encourage fan endeavors. 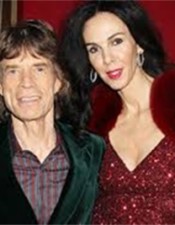 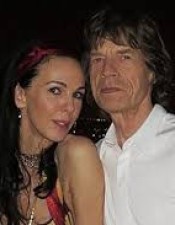 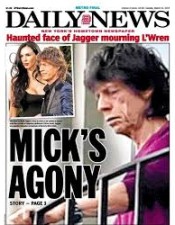 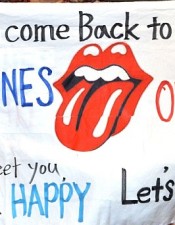 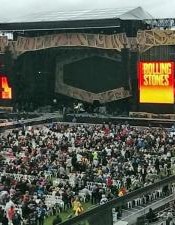 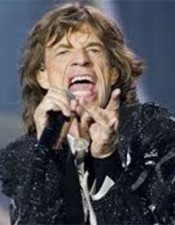 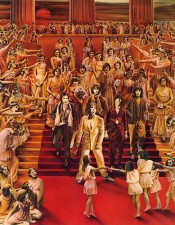 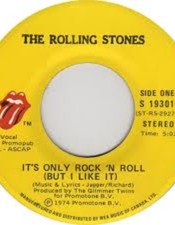 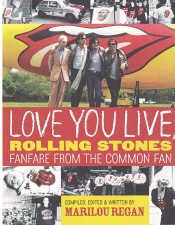 One of the most extraordinary characteristics about our Queenie was the way she was so mobile for nearly a decade with a very difficult language barrier. Music is the universal language – and she loved it live! Using charm and moxie, she managed to communicate with people no matter what country she was in, although not often smoothly.

So at the Stones hotel in Munich in June, 2003, after their first of three shows, it was a great surprise for me to find our little Queenie speaking English with greater ease and fluency than in the past nine years since I’d met her.

She was excited to see me and took me aside and said she had something important to share. I became quite emotional when Queenie told me that she learned to read and speak English because of my Stones’ fans tribute book, “Love You Live, Rolling Stones:Fanfare from the Common Fan.”

She wanted to read my book, she said, and that’s what motivated her to spend the past six months cracking its spine to translate each of the 80 fan stories with an English/Japanese dictionary. She copied down each word, studied their meaning and practiced the pronunciation. And then, with her newly minted English skills, she said that she read the book’s 255 pages all over again, out loud. I was amazed and she was so happy.

As if on cue, we both gave each other a little bow and said “thank you,” and then laughed and hugged and raised a toast to all Stones fans! It wasn’t lost on me that the Queen of the Fans made a language and communication breakthrough by reading other Stones fans’ stories.

I already loved Queenie for her courage and dedication to our band, but on that day in Germany, we bonded more deeply in a very powerful way. I’m sorry that I can’t claim to be one of her closest friends, but I know we had something very special, heart-to-heart.

And so with great heartbreak, I faced the suicide of a dear friend. Again, another good bye to another good friend. My tears were pooled with many millions shed by fellow friends and loved ones when we learned that our little Queenie died in Japan last November.

And we all wailed, “WHY?! HOW?!” And those of us who knew that she took her own life wailed the loudest when we faced how much despair she had been hiding. She may have thought she was ending her pain, but she was really just passing it on to all of us.

Her story is more poignant as some of the details unfold. I can’t profess to know the complete, complicated story of her challenges. However, I learned about one disheartening scene where our Queenie had an emotional setback before a Rolling Stones concert in Adelaide, Australia, in October. She made an attempt on her life there after a situation that was obviously a final straw for a fragile Queen.

Sources said that she was promised a lift to the show on the Stones family-and-friends bus by a VIP, but when she arrived to board, she was not on the list and was turned away. The faithful fan who took buses all over the world to follow her band thought she was going to ride in style. Instead, she felt shunned and shamed.

Since superfans have no fan liaison in the Stones’ organization to sort out mis-communications like this, she had no one to turn to confirm the VIP’s invitation. The gate-keepers are usually firm but nice about it when they dismiss someone not listed, so she surely was not publicly humiliated at the bus. But clearly the disappointment was too much to bear.

That awful and embarrassing incident was cataclysmic for her, and she must have reached a critical place in her soul where intense levels of darkness were flooding. Since most people who die by suicide, or make a failed attempt, have significant depression, the experts tell us that it narrows their problem-solving skills and makes it impossible to imagine that the pain will ever go away. But with appropriate professional treatment, depression can be helped.

Tragically, that was not to be the outcome for our two significant Stones sisters. No amount of Stones magic could help them, not even the maximum amounts they both had access to.

We lost our little Queenie the same way Mick lost his L’Wren, and now we all share such complicated grief. But we also need to share Mick’s assurance to speak up, sing out and rock on! And to keep the spirit of the Queen of the Stones Fans in our hearts – and in the front row.