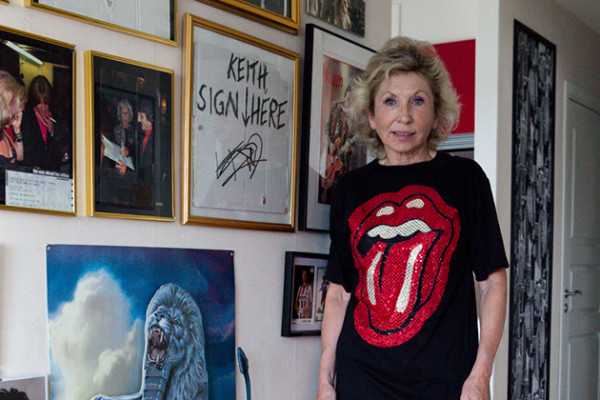 Before Keith Richards plays the sold-out-in-30-minutes Rolling Stones show in Stockholm, Sweden, at the Tele 2 Arena on July 1, he may listen to his guilty pleasure on their own turf – Keith is said to enjoy grooving to the Swedish pop group ABBA!

And Sweden is also where you’ll find one particular Rolling Stones super fan who put her passion on display in a popular coastal town that dates to the 11th Century.

Barbro Karlsson displayed her personal collection in an exhibition to celebrate the band’s 50th Anniversary, called “It’s Only Rock ‘n’ Roll,” at the Music Library in Västervik, Sweden. It was a labor of love when Barbro spent several weeks putting together her treasures for the Stones exhibition, which ran for six weeks through November, 2013.

The exhibition was a smorgåsbord of unusual and cool collectibles, and many of them were beautiful and sexy Rolling Stones’ women’s fashion that she created herself (and models below, click on thumbnails ).

She and her husband, Anders, spent several hours to display it all in glass display cases and cupboards. There were hundreds of items that filled three fully packed suitcases.

The exhibition was a hit, and fans flocked off-season to this popular Scandinavian vacation town. Barbro became a media darling and was interviewed in the press about her love for the Stones.

The exhibit’s curator, Dag Jonasson, is a huge Stones fan himself and learned about Barbro’s collection and reputation. When he contacted her to lend her coveted collectibles for the show, she was flattered and delighted to show how much she loves the Greatest Rock ‘n Roll Band in the World.

Ove Tingvall also contributed some rare items from his collection, including the green jacket Mick gave him personally and is worn by Barbro in the gallery here. Ove is also a member of the Nordic Stonesvikings, the Swedish Stones fan club. 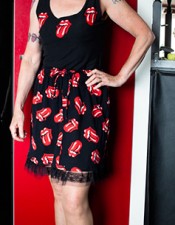 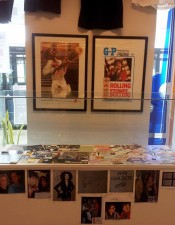 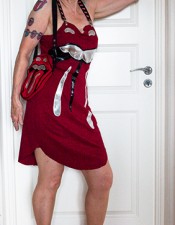 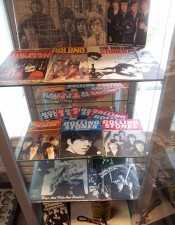 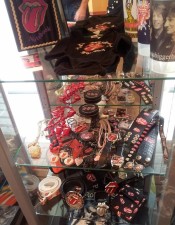 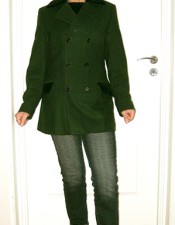 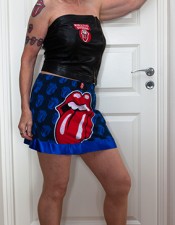 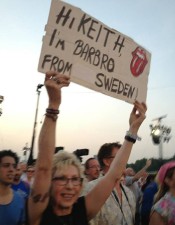 Here, in her words, is Barbro’s story of her evolution as a Rolling Stones fan.

First of all: My mind has lately been on Sir Mick in particular, and the band in general. I refer of course to L’Wren Scott’s tragic death. R.I.P L’Wren.

Background
Gothenburg: The year was 1963, and I was almost 15 years old. It was summer and hot. We had great summers in Sweden at the time.

The Beatles, everyone knew, had revolutionized the well-combed pop world last year. But now it’s 1963 and a new band comes on the scene with their debut single, Come On.

Yes, it sounded different, but what did the band look like and who were they? We had no idea, yet, what this band was all about.

The answer came in an issue of Bildjournalen, the only pop magazine that existed here at that time, and it was an adolescent’s “bible” to all teenagers. It included a two-page spread with the new pop band The Rolling Stones. It said that they are from London, are around 20 years old, have their musical roots in American blues, you could read all about them.

The photo shows five young men with a lot of glum faces. I looked closely at them, and saw a dark-haired guy in a pea coat and – bang – I was in love! What a handsome guy!

Keith Richards! His charisma went straight from the magazine into my heart. And the rest is history, as they say. But it was a milestone in my musical life. And he’s still the man in my life, along with my husband.

Also, I have now met him, but it took 40 years. As a teenager, you could not even think that far ahead!

Their music
Yes of course, their music, and the performance of the same, is absolutely wonderful. I do not have words for this, either in English or Swedish! Moreover, it has also been exciting to follow their interesting life for 50 years!

Actually, the only two songs that I’m not fond of from the whole Rolling Stones career are, Angie (I think Mick sings in a ridiculous way) and, I can say that I never really liked Come On, one of the few Stones songs I do not feel at all (maybe because it was written by Chuck Berry and not an original?).  Still, ironically, there was something that happened to me when I heard it for the first times in 1963.

Concerts
First, in 1982, I had occasion to see the Stones for the first time. Since then it has become 44 shows. And I’ll add four more this summer: Oslo, Vienna, Rome and Stockholm.

The best? Nothing, NOTHING beats club gig at The Astoria in London 2003. The only time I stood about one meter (3 feet) from the stage, and no one in front of me. The runner up: I loved both of the two concerts at the O2 Arena in November 2012, including Bill Wyman, Mick Taylor, Eric Clapton, Jeff Beck and several more.

Hyde Park in 2013, was a classic! Who would have imagined that the band would do this again?! And this time I was a part of it all. Both concerts!

After that, the next favorite memory is when we toured by car around Europe for concerts in 2006 and 2007. Even in the U.S, it has become a number of concerts for me there, too.

After the internet’s entry in our lives, it has become so much easier to get a hold of tickets and things like tour listings, which were hard to find before. Therefore, earlier, I was happy when I could go to shows in Sweden. Never mind the rest of the world.  Now I can have any and all!

I met….
Ronnie I met in Boston, outside the gallery where he exhibited his paintings. He gladly wrote me an autograph and was in a good mood!

Bill, I have met several times when he played with the Rhythm Kings in Gothenburg.

Mick Taylor. I was lucky enough to get a ticket to Mick Taylor’s gig at the 100 Club in London in 2003, and later that night, I got the entrance ticket signed.

Keith, my Keith! In Astoria, he pressed a guitar pick in my hand and then I got countless blow kisses during the concert. The evening after that, in Twickenham, he recognized me and wrote his autograph on a piece of cardboard, which is by far my most cherished possession.

Only Mick Jagger and Charlie are left, who have not yet had the privilege to meet me.

The compulsory questions
The recurring questions from people not in the know are:

What is your favorite song with the Stones and what is your favorite album?
Completely impossible question to answer because the answer varies all the time. I can, for example, play a record I have not listened to in a long time, and suddenly that disc, or a song on it, is my favorite for a while.

Why do you continue to go to as many concerts, you’ve already seen them several times?
Well, how do you answer to such a completely stupid question? If you’ve ever been to even one Stones show you understand.

Nordic Stones Vikings made their entrance into my life
In 2007, I was the first /only woman elected to join The Nordic Stonesvikings, which I am extremely happy and proud of! My entrance into this small exclusive club has great benefits – I have finally made friends I can talk about the Stones at the right level.

Design
I thought for several years that the Stones merchandise had such a sad selection for women. So I began to design and sew  some clothes myself. For example, there were no gowns, only an occasional skirt. Also, it is fun to wear something that nobody else has.

Exhibition
During October / November, there  was an exhibition in Västervik, a small town on Sweden’s east coast, south of Stockholm. I have been asked whether I want to lend my own designed clothes in the first place, and then all my other memorabilia, and of course I will! I agreed immediately, smiling and bringing the light into the dark Nordic winter!

It was fun to share all of this with other Stones fans, things that otherwise are locked up in large cabinets. 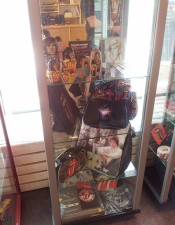 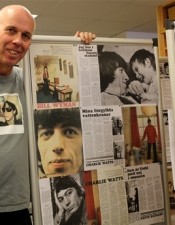 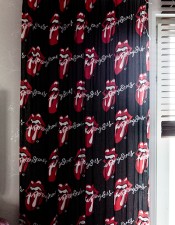 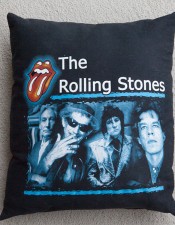 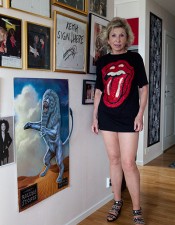 Last but not least – Brian Jones
What if the Rolling Stones had never existed? What if one never had heard their music?! A BIG thanks to Brian Jones! Unfortunately, you couldn’t be there all the way. But, I’m sure you looked down on us from the rock-star heaven, with a big smile.

The other members of the band have often said that Brian was paranoid. Yes maybe he was, but who wouldn’t, under those circumstances?  He has said: “They took my music, they took my band, they took my love.” And in a way I agree with him.

While we’re on the subject, Brian, I can also tell you that I met Anna Wohlin, through a friend, this winter. It was an amazing experience to get to talk to her for half an hour and she also signed her book (“The murder of Brian Jones”) for me. She is a very friendly and likeable woman!

I’m glad to have had the opportunity to visit his grave, which was the most emotional moment I have ever experienced in my entire life! R.I.P. Brian and thank you!