“The Bura” from Bernard Fowler: Somethin’ Musically Special Blowin’ in the Wind

Bernard Fowler’s new CD, The Bura, is fittingly named for the fierce, north wind that can blow at hurricane speeds.

When Bernard felt its power along the coast of Croatia, he said the Bura recharged him with a new depth of awe, especially in its aftermath with the clean, crisp air it leaves behind.

“It blew through me. Blew my wind out of me. It blew me away,” the singer/songwriter/producer said with gusto, and with a dramatic delivery that makes you understand how this extreme weather experience really changed him. “And it’s still blowing me away!”

Those intense gales of wind inspired Bernard as he headed into the studio to create his second solo album.  And The Bura, with its 11 powerful tracks, lives up to the spirit of its namesake with vocals that rocket like a force of nature and music that cuts right through you.

On Wednesday, August 19, Bernard will appear on The Tonight Show Starring Jimmy Fallon, sitting in with the Roots to perform several songs from his new album.

“Yeah, how very special is that? It’s gonna be crazy, I can’t wait,” said the artist, who, despite a long and storied career as a lead man, he’s most widely known as the Rolling Stones backup singer for nearly 30 years.

The next night, Thursday, August 20, Bernard will perform songs from The Bura and from his infinite repertoire of rock ‘n’ roll hits at the Highline Ballroom in New York City. And he will keep on rockin’ August 21 at McLoone’s Supper Club, Asbury Park, NJ.

“I love performing live and I learned from the best. The Bura provides a fresh opportunity to put my own music out in front of a live audience,” he said. As an accomplished producer, songwriter, percussionist and performer, Bernard works with the best musicians in the business.

“What a cool cat Marc is to offer to help me make this happen,” Bernard said.

There is no shortage of cool cats in Bernard’s life, and a clowder of them came to his L.A. recording sessions to play and sing on The Bura. He recorded over two years in between Stones gigs and a variety of other projects, including a trip to Cuba in February with the Dead Daisies, “a collection of some of the best Rock musicians on the planet,” says their website.

“Everyone that’s on the record, they’re all my friends. So I called my friends and called in favors, and they came and played, “he said. “There’s a lot of talent and great guitars on this CD. And I’m grateful to them all.”

The music credits confirm the prowess, and they read like a wish list of the studded-stars (and a few ladies), who lead the ranks in sustaining rock and blues. And VIPs from hip-hop and rap are representin’ too.

A Stones cover song reunites Bernard and his band mates from Tackhead: Doug Wimbash, Keith Leblanc and Skip McDonald. And lending her angelic vocals on four songs is Lisa Fischer, his female parallel and fellow backup singer with the Stones.

The Bura co-producer and co-writer, Robert Davis, joined forces with Bernard to put together an album that is “guitar-heavy, just how I like it! It’s mainly a rock and roll record – with seasoning,” Bernard said. 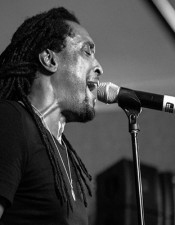 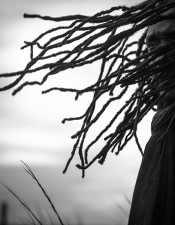 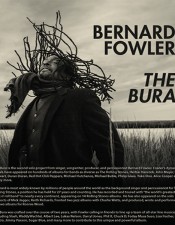 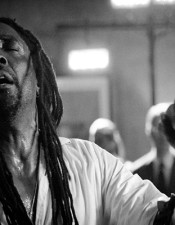 “The song writing came relatively easy working with Robert, a great guy and talent, he added.  And there’s a little bit on it for everyone.” The “seasoning” includes some funk, soul, gospel and reggae. Songs include a mix of six originals and four ambitious, excellent interpretations of classics, like Queen’s Dragon Attack and the Beatles Helter Skelter.

Robert Davis played the guitar on 10 of The Bura tracks, and contributed drums and background vocals on others.

“Making this record was a fantastic moment in life, working with some of the true, great musicians of our time,” recalled Robert, who can be found working for artists like R&B superstar Lauryn Hill.

“Working that closely with Bernard, writing and producing together, was a humbling experience. He is a multi-talented, force to be reckoned with and he is just getting started.”

The initial album concept was to be all covers, Bernard said, but when he started writing his own songs, coming from a deep place inside his heart and soul, he was feelin’ it.

“I love music – all different types – and for me, music oozes emotion. I do creative things strictly by feel, and my CD mirrors my passion,“ Bernard said. “I wanted (The Bura) to take my fans to a place that one-dimensional records can’t oblige.”

Indeed, the guitars and vocals on The Bura can take fans and new listeners to a multi-dimensional musical place, with the backing vocals working as a melodic instrument and the harmonies pure perfection. Bernard harmonizes and sings backup with his own voice, and the results are eerily amazing. (A cool parallel: Mick Jagger was one of the first rock artists to use this recording technique of harmonizing with his playback.)

“There’s no sampling or tech music on this record,” Bernard said, emphatically. “No auto tune. Don’t get me started on that topic.” Bernard Fowler is one artist you will never find hiding behind technology. He’s been real from the get-go.

“Some of the choral arrangements on the record are from stuff I wrote for my first band, the New York Citi Peech Boys. The material has longevity,” he noted.  “It’s one of those best-kept secrets, you know, how important background vocals are. When vocals are the lead instrument, or the melody maker, well, they get the spot light. But backing vocals are an integral layer to the overall sound.”

Not only is Bernard integral to the overall sound of the Rolling Stones, he’s been an indispensable part of each of the Stones solo careers. He also worked with his good friend Bobby Keys, the late, great Stones saxophonist.

With such a strong Stones influence in his life, Bernard has included a Stones cover on The Bura. “I am inspired by them constantly, and will be for the rest of their days. After all, they are the world’s greatest rock and roll band,” he acknowledges. “I will always include a Stones song on any album I make as homage to them.” His freshman album in 2006, the critically acclaimed Friends With Privileges, includes Wild Horses.

The version of Can’t You Hear My Knocking on The Bura is a surprising, sudden departure from the Mick Jagger/Mick Taylor original on Sticky Fingers. Bernard’s vocal arrangements, and the shot of coolness with a rap by Chuck D (leader of rap group Public Enemy), combine to add an unexpected and exciting urban flava.

At the Rock and Roll Hall of Fame All Star Stones Tribute in Cleveland in ‘13, Can’t You Hear My Knocking brought down the house with Bernard fronting on vocals. That’s where Bernard met Chuck D, who was tapped for the gig by musical director and drummer Steve Jordan.

“This all happened long before the Stones re-released Sticky Fingers. I had already recorded Can’t You Hear My Knocking and had it in the can. It was supposed to be on a new Tackhead record and I put a lot of studio time on that song,” Bernard remembered. “But I took it back after hearing Chuck D in Cleveland and I asked him to rap on my version. Nobody else ever gonna do for the track what Chuck did.”

Another Stones connection that Bernard worked with at the Rock Hall was Sugar Blue, a performing buddy from NYC. The renowned harmonica player is famed for his blistering lips on Stones tunes Miss You, Down in the Hole and Send It To Me. (Ed. Note: He is often credited with playing on “Black Limousine” from “Tattoo You” but it’s actually Mick Jagger.)

“It was a no-brainer, when I needed the best harp I just called Blue and asked him to play for me.” said Fowler. Sugar Blue adds his signature tone with weaving, wailing harmonica on the Mississippi blues-style original “My Friend Sin,” as Bernard sings about temptation. Slash also wails away on his guitar and Lisa Fischer’s voice sweetly complements B’s.

“Bernard can sing anything,” Lisa Fischer acknowledged. “He’s an amazing interpreter, writer and artist. And in the studio we experimented and tried to bring different things – different styles so distinctive, but without being in a particular genre. And the results are musically delicious.”

The album that was made without a record company budget is super rich on soul and sound. But that success didn’t come easily. Bernard didn’t expect to be cash-strapped when he had agreed to a crowd-source funding platform, PledgeMusic.

“I didn’t want a recording contract and to have my creativity controlled. I thought the fan-funding site would be a great resource and alternative,” he said.

At first, he was very enthusiastic about the pledge project, especially when the pledges rolled in. But he later found out, to his greatest dismay, that the CD had to be completed and released before PledgeMusic would turn over any of the funds, which surpassed the financial goal by 69% with over 200 fan pledges.

This threw a complete monkey man-sized wrench into the budget and timeline, and Bernard had to be creative as a producer, and now sole financier. All of his supporters hung in to the end, except two, but he felt the pressure.

“Yeah, I felt bad. I had a set back and a lot of longs days and long nights. But I rose to the challenge. This album is all me, through and through,” Bernard said. “I am so grateful for my friends and fans for their love, donations, and patience waiting for The BuraSo I included a bonus track to add some extra sweetness for the fans, to thank them.”

Two sweet, alternate versions of The Letter are included, and the song, made popular by the Box Tops and Joe Cocker, is produced and arranged as an instrumental and an acapella rendition.

The latter Letter is a final musical gift on the album, with Bernard/Lisa Fischer harmonies, voices blending as one celestial sound. Since Lisa has been singing onstage with Bernard for some 26 years, she has clear insight and loving admiration for her partner.

“Working with Bernard and the Stones has given us the opportunity to speak without saying words. A lot of time he feels, and then sings something wonderful that springs from those feelings,” Lisa recalled. “This album is filled with meaningful music. Bernard did a beautiful job and will be rightfully recognized. It’s his time.”