Can’t You Hear Me Knocking 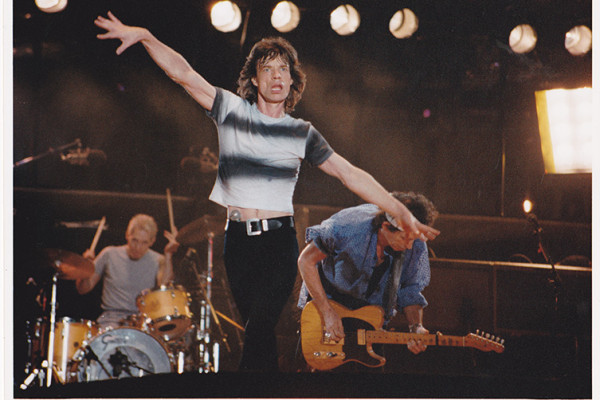 Some things are better left unchanged, and the current induction ceremonies for the Rock and Roll Hall of Fame are definitely proof of that. Now days the inductees usually play a well-rehearsed two-song set with a staged all-star finale at one of rock’s biggest annual events. But that kind of musical correctness just doesn’t compare to the nitty gritty and raw rock ‘n roll of the ceremony’s early years.

Back then the musical performance was a legendary jam at the end of the ceremony where anything could happen – and it did! The inducted artists packed the stage – sometimes 50 strong – and performed each other’s hit tunes with the help of special guests. What an incredible, spontaneous and exclusive event!

And what a great opportunity for a photo op with dozens of rock legends onstage who never performed together before – and never would again! As a freelance rock photographer and a native New Yorker, I knew I had to find a way to get in.

I didn’t have the right credentials to wrangle a press invitation but I’m a loyal rock fan who paid my dues. I felt I deserved to be there when my favorites were being honored since I’ve been to over 500 rock concerts including 53 Bob Dylan concerts and 76 Rolling Stones shows (I know this because I kept all of my ticket stubs.)

It took me two years to actually want to go to the ceremony (I didn’t think it was worth the trouble at first) and about two weeks to figure out a plan to crash the party at the Waldorf-Astoria.

My first year’s plan was flawed but fabled. I was able to get in when the Beatles and Bob Dylan were inducted in 1988 by hiding in a utility closet on the mezzanine for over three hours before the ceremony started. I took in a glass of water with me, wore my street clothes and changed into my tux inside the dark, stuffy cupboard. When I heard the ceremony begin, I was ready to slip out and make my undetected entrance. Only one problem – I couldn’t get the door open.

“Uh oh,” I thought, “this is like an ‘I Love Lucy’ episode and I’m gonna be thrown out.” I had to keep knocking on the door to get someone’s attention but even the staff and security couldn’t get it open either. After too many minutes of communicating with security through the closed door, they suggested I just give it a good hard kick. Bam! That did the trick and I emerged from my sanctuary with the glass in my hand.

The staff hovered all around me. “Are you all right sir?” they kept asking and that’s when I knew I hadn’t blown my cover. I told them that I had been feeling sick and went inside the closet until it passed. They seem satisfied with the explanation and I went on my merry way to mingle with the invited guests. The long solitary confinement was well worth it, my favorite picture I took that night is Mick singing with the newly inducted, late, great George Harrison.

That was definitely an exciting night, but it was the next year – when the Rolling Stones were inducted on January 18,1989 – that was the peak experience of all seven times I was able to sneak into this historic event. 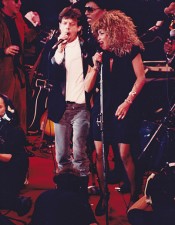 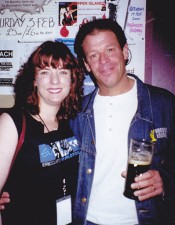 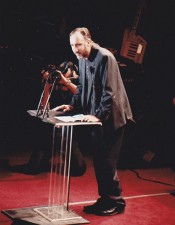 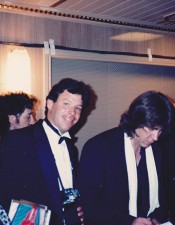 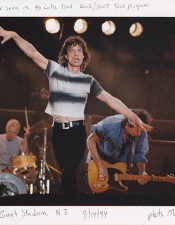 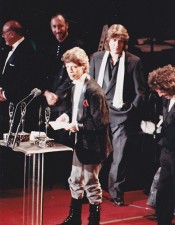 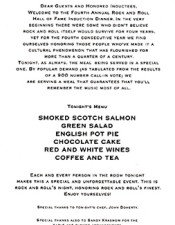 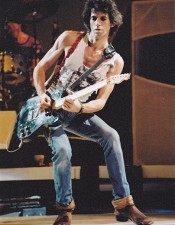 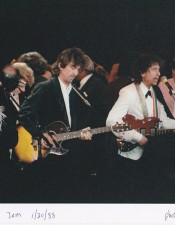 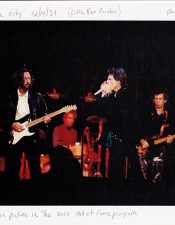 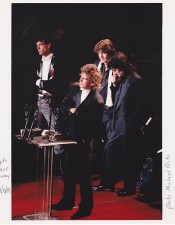 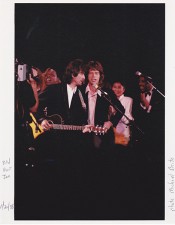 It was very nerve-wracking the first year that I snuck in and the nerves stayed with me even after I infiltrated the party. I was worried the entire night that I’d be found out and escorted out. But the next year my new plan worked flawlessly, and for five other ceremonies after that one.

I’ve worked as a bell boy for 30 years at the Helmsley hotel (soon-to-be the Westin at Grand Central) and I knew that hotels had fire staircases and entrances into their ballrooms. So I snooped around the Waldorf until I found a way in through the kitchen. I checked into the hotel on the day of the event and changed into my tux (with a pocket full of film), which also had to camouflage my camera, zoom lens and a cassette recorder to tape the show.

I was afraid I’d be noticed if I arrived too early, so I timed my entrance to about a half hour before show time. Once I made my way into the ballroom I gave a banquet waiter twenty bucks to bring me a Heineken and a program. With these props I could blend in as a guest while I mingled; without a table or seat to claim (no pot pie for me), I had to keep moving.

The mezzanine, the scene of last year’s crime, was a great place to finally hang out and set up my photo and audio gear and where I could shoot over everyone’s heads. I gained confidence once the house lights went down but stayed out of everyone’s way.

The night of the Rolling Stones induction was a very extraordinary jam to have seen live. With about 30 legendary artists onstage, it was a musical cluster of organized chaos and a mash up of jumbled hits. The show’s producer was the late Bill Graham, rock promoter, and the music director was Paul Shaffer, leader today of the CBS Orchestra. They were on the stage calling – sometimes even pushing – the various performers to the mics when it was their turn to be featured.

The stage was packed with rock and roll’s finest: Mick Jagger, Keith Richards, Ronnie Wood, Mick Taylor, Pete Townshend, Stevie Wonder, Paul Simon, Tina Turner, Little Richard, Bruce Springsteen, and the Temptations. There was hardly any room on stage for anyone to move or dance around, and on many of the songs the artists seemed mostly to be winging it – no one knew who was singing with who, or when.

Sometimes a mic wasn’t working and there were moments of confusion, but I could see how unfazed (or buzzed?) everyone was and how much fun they were having. There was a sound check earlier but not everyone was there and there hadn’t been any extensive rehearsing. These were professional musicians and I guess for the most part they thought they could pull it off – and they did. All-in-all it was a fantastic night of fabulous free-for-all performances filled with glitches, off-key and mumbled lyrics and wrong chords.

And I was taking photos the entire time. My adrenalin was rushing because I didn’t belong there but I had the nerve to take out my camera and capture the moments. After the show I wanted to get right back to my room and put the goodies away. You don’t want to be hanging around after you rob a bank, so to speak.

In those pre-digital days you didn’t know how your pictures turned out until they were developed. But I shouldn’t have worried, when I got them back the next day – whoa, they were awesome! I was so happy I threw my hands in the air! And it made me really happy to know that as a true fan I could take these snap shots of rock history. More fans should be at these events, taking in every word and every lick, instead of the tables filled with rude (mostly female) music execs interested only in the free wine and talking loudly over the speeches and music.

My sneaking-in success spread among my friends, who are also big rock fans, and I invited a couple of them to crash the gig with me in subsequent years. I snuck my way into five more induction ceremonies for my favorite bands: 1990 (Who, Kinks, Simon and Garfunkle), 1992 (Yardbirds), 1995 (Neil Young), 2000 (Eric Clapton), and 2005 for U2, which was my last ceremony when I got busted by security.

I don’t know what gave me away that night, but the gig was up. That was really okay by me, by then the ceremonies had lost their luster and were over produced. But I am very grateful for the seven ceremonies I got to go to as a loyal fan and rock photographer.

My Rock and Roll Hall of Fame photos joined hundreds of my other pictures at the Star File Photo Agency until it closed after the death of the owner and my dear friend, Virginia Lohle. Today many of them can be seen at my website classicrockconcertphotos.net.

I’ve taken thousands of rock ‘n roll concert photos since 1979 and shot most of them from the first ten rows. Virginia knew not to waste a press pass on me. I always bought my own ticket so I could shoot the whole show and not get kicked out after the third song, like press photographers with pit privileges.

Thanks to Virginia and her fantastic staff at Star File, my concert photos can be seen in many music books, magazines, DVD covers, TV specials and even on a Clapton tour poster. And some of the Rolling Stones pictures I am most proud of have very special placements.

One of my Mick photos from Giant Stadium in1994 is in the Licks 2002 tour program and it was also used on the Rolling Stones pin ball machine by Stern (it’s on the playfield by the flippers). And a full-page head-to-toe shot of Keith from 1981 is in the 40 Licks limited-edition CD box set. Yes, I am very proud.

But the placement one of my most favorite photos is also very ironic: it’s in the 2000 Rock and Roll Hall of Fame program. When Eric Clapton was inducted as a solo artist, he used my 1989 photo of him onstage with the Stones in Atlantic City. It was a good thing I could crash the induction ceremony that night – I had to snag a coveted program.

What a great feeling to page through the program and to find my picture! And when I saw my photo credit under it, well, it was actually better than getting an invitation to the show! Especially when I didn’t need one anyway.

Hope to see you at the next concert!