Bernard Fowler Releases New Solo Album “Inside Out”, Reconstructing the Songs of the Rolling Stones 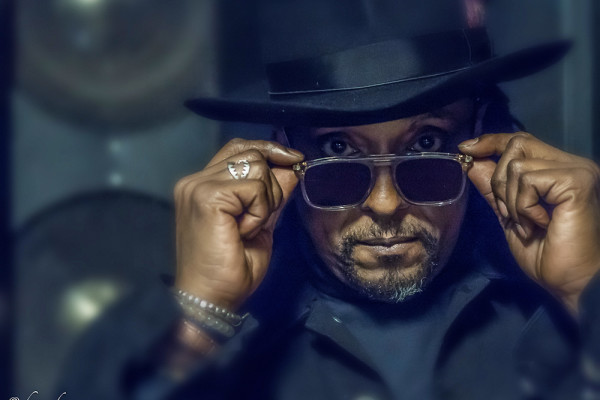 Bernard Fowler is a versatile songbird who is sharing his incredible voice – and some Rolling Stones songs — in an entirely new way.

Bernard brings a new spin to the band’s music and lyrics with the release of his latest solo album, Inside Out, where he puts the emphasis on the spoken word.

He’s deconstructed the Stones music, turned it inside out and then reconstructed 8 songs into his LP on Rhyme & Reason Records.

Featuring his unique spoken vocals and distinctive musical adaptation, Bernard’s poetic interpretation of the Stones catalog is groundbreaking and exceptional. He makes you re-hear select Stones songs and re-think about them with a fresh, and maybe darker, point of view.

Bernard has been renowned as the backing vocalist and percussionist for the Rolling Stones for 31 years and his intimacy with the band and their music led to his latest solo project.

“Song lyrics are basically poetry,” Bernard told me in a phone interview, “And the idea to present the Stones lyrics in this poetic, rhythmic way started in my head a couple of years ago and happened to come out at rehearsals. I got great feedback and that gave me the encouragement to go into the studio.”

The great feedback Bernard refers to came from some a couple of musicians who know the songs pretty well, the Glimmer Twins themselves.

The album’s liner notes detail how Mick Jagger was impressed at a Stones sound check with a jam session on the congas featuring Bernard’s funky percussion and beatnik inflection of the lyrics.

“Bernard, I’ve heard Rolling Stones songs played in many different ways, but I’ve never heard it like this before,” Mick said.

The notes also reveal the highly paid compliment from Keith Richards when he heard “a taste” of the album, telling Bernard “Damn, Fowler, you went deep…” 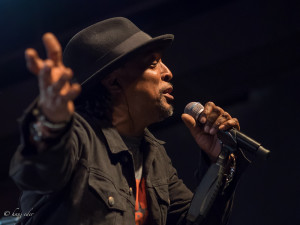 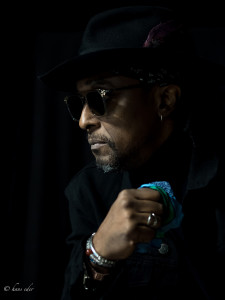 On Inside Out, Bernard said he reworks the words and the rhythms in a way that evoke the Last Poets, the musicians and poets who were some of the earliest influences on hip-hop. He says they inspired him with their tight rhythms and politically charged raps; as did a televised performance by poet, activist and journalist Felipe Luciano that Bernard said “lit a fire.”

Bernard has worked with the Stones in the studio and onstage, both collectively and personally, as well as touring and appearing on their solo projects. Inside Out is his third solo LP, which follows Friends With Privileges in 2006 and The Bura in 2015. At the time, I interviewed Bernard about The Bura, as well a Pledge Music project.

Bernard Fowler’s latest work is a departure from using his voice as a chanteur; he’s more like an orator backed by funky beats, using precise enunciations with the emphasis on interpreting the lyrics.

“We started with percussion — the heartbeat of music — and the album is almost all just that,” Bernard said, “We used it to create new interpretations of the Stones, it was the perfect driving force.” 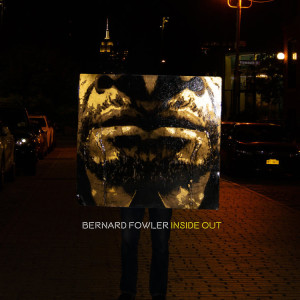 Inside Out has 8 songs from 5 Stones albums, with Undercover sourced the most, leading with half of the songs covered. All the material has dark themes and undertones that precisely reflect the mood that Bernard knew he wanted.

“I went through all of (the Stones) material, which is vast as you know, and I was looking for the right lyrics that resonate,” said Bernard

“That’s why I called it Inside Out, the whole world is inside out,” he understates. “And everything that I chose to record is all very significant today.

“When I needed content to do the record, none of commercial Stones songs that most fans are familiar with, well, they didn’t work. I wanted some of the deeper material, stuff that people didn’t dance to or head bang to.”

He chose to use four of the album’s songs from Undercover because “it is so relevant now with Russia and WikiLeaks and with all that is going on politically.” 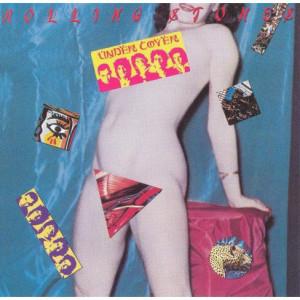 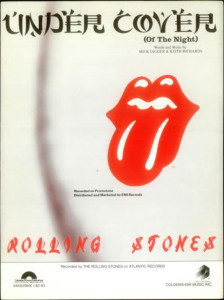 For his cover of “Undercover of the Night,” a single from the Undercover album, Bernard used poetic license and translated the original English dialogue from the song’s promo video prologue into Spanish.

With an emphasis on its theme about Nicaragua’s political corruption, Bernard wanted the “Undercover of the Night” intro to be recorded by a young woman who was native to that Central American country.

“I wanted it to be authentic and come from the source. Spanish is spoken differently all over the world and the dialogue had to be spoken by a local. But that wasn’t an easy find in LA,” Bernard recalls. “Thanks to (bass player) Carmine Rojas, he sent me Raquel, who happened to grow up in that turmoil in Nicaragua.”

The “Undercover of the Night” prologue is spoken by a woman hiding in the jungle who gets caught by a Nicaraguan soldier, voiced by Rojas on Inside Out.

At the Steakhouse recording studio where the album was recorded, “we put the girl, Raquel, in a recording booth and she cried when she was reading those words. She just had so much incredible emotion,” Bernard said.

“She delivered it like she lived it. Because she did live it!” he says emphatically.  “When that (recording) happened, it sent shivers down my spine, and that’s when I knew I had it. That piece is special to me.”

Bernard said the concept of reciting the Stones lyrics to some remarkable grooves came together with the help and support of the musical collaborators and guests on Inside Out, who include: bassist Darryl Jones, drummer Steve Jordan, pianist Mike Garson, horn player Tim Ries and guitarist Ray Parker, Jr.

“One guy said ‘only you would do this, Bernard. Nothing like this has been done before.’”

A conga-driven re-make of “Sympathy for the Devil,” is the first single from Inside Out and also features tambourines and piano “riffs” replacing the guitars. It stays true to the famous “woo woo’s” and Bernard’s voice sounds like Beelzebub himself.

His voice on “Sister Morphine” exudes desperation and addiction, and on “Must Be Hell” the sax, congas, and shakers help make the chilling lyrics come alive. Bernard’s interpretation of “Dancing with Mr. D” takes the sinister theme to another level. He promises that the forthcoming “Mr. D” video will be “super cool and totally hot.”

“This was a very personal project,” Bernard says. “I didn’t even have a recording budget, there were no record companies involved then. Not a lot of record companies would have gotten it, like Rhyme and Reason did.” 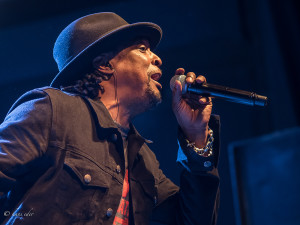 Bernard was turbo charged with satisfaction about Inside Out during our interview; his energy was organic and remarkable, especially given the grueling schedule he’d been on. His third year with A Bowie Celebration: The David Bowie Alumni Tour led to four months on the road (three of them consecutive) with week after week of back-to-back shows.

So many cities and so many performances would take its toll on any musician, especially the lead singer. But Bernard downplayed any rock ‘n’ roll road stress. “That’s what I do,” he said about touring relentlessly. And he does it so very well.

When we spoke on the phone about Inside Out, he was a couple weeks away from the show at the Keswick Theatre on March 10 in the Philadelphia suburbs, where I would enjoy his powerhouse performance of Bowie tunes.

Bernard has a chameleon-like voice that can sound just like any of the greatest front men in the history of rock. That versatility serves him well when he is singing backup with Jagger and Richards. I’ve heard Bernard sing a lot of material solo these past three decades, but when his voice was showcased on the Bowie tour it was a whole new dimension to his talent.

After the show we spoke further about the album excitement, albeit briefly. The fans at the after party swarmed Bernard for photos and to gush and praise his performance. 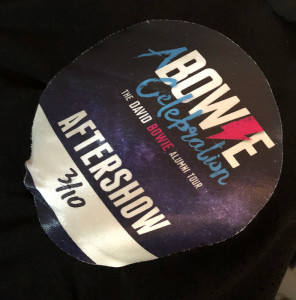 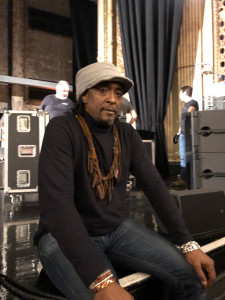 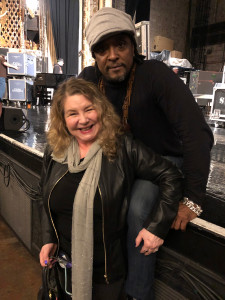 In March, thinking that he was going to evolve soon from lead singer to back-up singer, Bernard said he was ready to switch gears into the Rolling Stones rehearsals in April in Miami for the “No Filter” tour. The Bowie show was going to move on to New Zealand sans Bernard.

But that’s not how destiny was ordained. After the Stones cancelled their tour so Mick could recuperate from his unexpected heart valve procedure, Bernard re-joined the Bowie Alumni Tour. While Down Under, he will be promoting Inside Out.

When he is back home stateside, “I’d like to do a tour or at least some shows around the album,” Bernard said. “Stay tuned.”

“Tie You Up,”  Undercover
“Dancing With Mr. D,” Goat head’s soup
“Undercover Of The Night,”  Undercover
“Time Waits For No One,” It’s only Rock ‘n’ Roll
“Sister Morphine,”  Sticky Fingers
“ All The Way Down,”   Undercover
“Must Be Hell,”  Undercover
”Sympathy For the Devil,”  Beggar’s Banquet