A French Château, Mick Jagger and Me 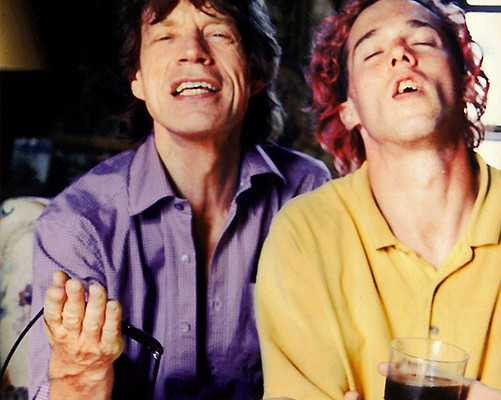 Meeting our idols rarely produces the imagined effect, and almost always changes the way we look at them forever after.

Not only does it change the way we look at the idol we met, but the way we look at idols in general. Now I’m not usually a very star-struck kind of guy. I’ve met a great deal of celebrities and never really felt too changed by the experience. But one such event that sticks in the memory is the time I met Mick Jagger.

I was working in an old château in France in 2000. It belonged, in part, to Seb, a dear friend’s cousin who was publishing a book of my poems. At the time, I had been living on the street in Amsterdam and had no resources, so Seb offered to put me up in one of the buildings on his family property and gave me some work helping him remodel the place while I finished writing my book. I spent a large part of the summer there, writing and working on the building, wandering around the château grounds at night, smelling the flowers and drinking cheap wine from the bottle.

I had just recently kicked a hard drug habit and months before I had bleached my hair to dye it orange and then pink. In short, I was a scraggly mess. I was gaunt in the face, with long messy hair that was now three or four colors at once. My clothes were the same ones I’d worn on the street, only now they also bore paint and plaster stains from my work on the walls of Seb’s place. I was still drinking quite a bit and had only just started eating well for the first time in many months. I can barely imagine what kind of sight I was, staggering through the gardens with my bottle and my notebook.

In the daytimes, I would do whatever Seb needed done. One day I would paint and one day I would plaster. One day I would sand and the next I would dig up old tiles. On the day in question, I was scraping hand-drawn wallpaper off of a centuries old wall when Seb came in and said, “Hey Jason, you should take a little break. I have a surprise for you.” So I put down my tools and followed him into the hallway where stood the man himself, Mick Jagger. I was dumbstruck.

There I was, covered with old paint, glue and sawdust, with big plastic goggles on my head, standing in front of the ultimate rock’n’roll legend. I extended my filthy hand and said, “Hi, I’m Jason.” He shook it and responded, in the most magically ordinary way, “Hi, I’m Mick.”

Seb had offered to take Mick on a tour of the château, which he quickly began. He took us down all the magnificent hallways and through each of the luxurious sitting rooms. Mick spoke French to him and remarked on the centuries and kings that were contemporary to the pieces of furniture. I trailed behind and watched them speak. Mick’s voice was so gentle, his curiosity so innocent, his posture so soft and easy. He didn’t twist, writhe or contort his face with agony for cocaine and sex with black girls. He strolled lightly. He was smaller, thinner, quieter and altogether less imposing than Seb (who himself is quite a gentle sort).

Seb led us out onto the terrace overlooking the grounds, where he told us a little about the landscaping. Mick and I listened and nodded together. Then we returned to one of the sitting rooms where we were joined by Seb’s wife and young son and Mick’s ladyfriend-du-jour. She was tall and aloof, with very precise features. She didn’t say more than a word or two, but I found her exacting to look at.

Seb walked over to a rarely used bar and asked if anyone wanted a drink. I blurted out “Of course,” which brought a boyish smile to Seb’s face, then Mick looked up and said, “I don’t drink, thanks.” Seb insisted on offering something and Mick finally accepted a diet coke, while I got to work on a seemingly old and expensive scotch. Mick told us a little about a film he was working on at the time, and he asked what I was doing. I told him that I’d been supporting myself on the streets by covering his tunes on a beat-up old guitar and that I probably owed him a few bucks. He chuckled flatly and waived his share of the proceeds. I wondered if he could still imagine getting really excited about those songs the way that I was. For a second there, I almost felt sorry for the guy. 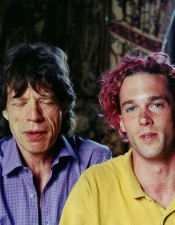 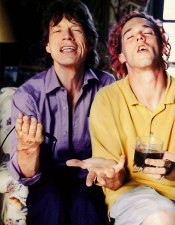 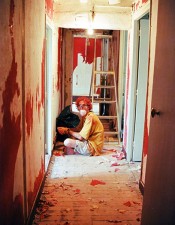 Then Seb got his camera out and took some pictures of everyone with Mick. First he got Mick to hold his baby and smile at his wife. Then he suggested that I go over to Mick’s chair and get in a photo with him. I was a bit embarrassed to bother him for such a thing, but I also couldn’t quite see myself missing my one chance at a photo with Mick Jagger. So I walked on over there.

As I approached, Mick transformed himself before me like a werewolf. He beckoned me to squeeze into the chair beside him. His eyes caught fire, his jaw line tightened, his lips swelled and his nostrils flared. He said to me, in a rushed and hyper voice, “What do you do when you’re out on the street? Trying to get a dollar off someone? C’mon! Let’s do give me a dollar!” And at that, he began to mug for the camera. Seb was prowling around us, picking and choosing his moments. Mick hit me on the leg, “C’mon! Give us a dollar!” He winced and puckered and pouted and growled. It was as if someone had thrown the rockstar switch in the basement and Mick couldn’t help that he was plugged into the circuit board.

I did my best to join in with him, but there was no matching the consummate facility of his showmanship. We made a few more faces, Seb snapped a couple of shots, and it was over. The werewolf was gone. Before I knew it, Mick and his companion were getting ready to leave and he was saying his goodbyes to Seb as a docile, soft-spoken student of French history and design. A couple of hours had gone by in what felt like seconds.

I didn’t speak again until we had walked them all the way back to their waiting car. I feebly thanked Mick for writing most of the great rock songs in history. He didn’t seem to notice what I’d said. His head ducked under the roof of the car and they were gone. And that was that. That was Mick Jagger. And that was me hanging out with him. 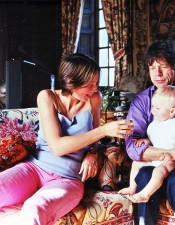 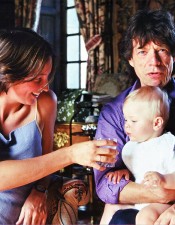 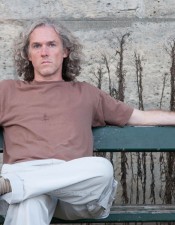 The street-punk rocker in me had been shown up in that chair. And the aspiring French socialite in me had been shown up in that hallway. Plus I’m sure he still has several other characters in him for the demands of whatever situation. So I took comfort in the idea that maybe he didn’t know who he really was, and maybe he always felt like some character. But that could just mean that the shapeless chameleon in me, always terrified of my own insincerity, was also shown up that day. Nevertheless, the world seems a little bit bigger to me since then, and not the way it does on the covers of record albums.

Post Script: Since his meeting with Mick, Jason Stoneking has gone on to publish three books, has written and directed two short films, and has recorded and album of his own songs. He is currently based in Paris again, where he has recently released a collection of essays. He writes about the art world for FineArtReviewer.com and Creative Sugar Magazine, and also works as a tournament commentator for Chess.com. More about Jason and his writing can be found on his website at www.jasonstoneking.com.