Fallin’ Through the Silver Screen 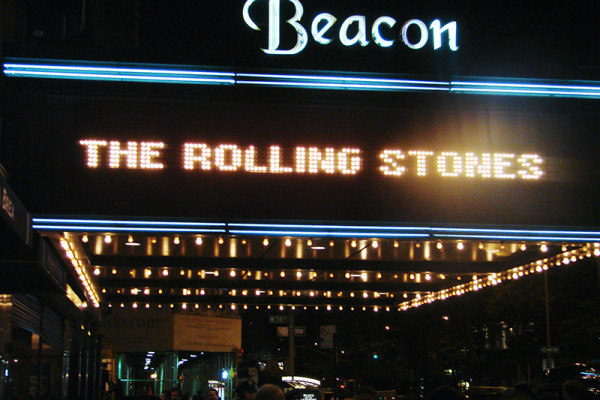 “This is new territory to me, and I’ve been around.” Keith quipped to the crowd when the Rolling Stones played the Washington-Grizzly Stadium in Missoula, Montana during A Bigger Bang tour. The Stones had never appeared in “Big Sky Country” before and on October 4, 2006, it was one of the biggest events ever held in my geographically huge—but populously small—state.

“The Last Best Place,” is Montanans’ favorite descriptor, and its majesty was not lost on Keith who wryly warned the 20,000 fans, “You’ve got beautiful country here. I’m thinking about moving in.”  Mick dubbed the band “the Maidens of Missoula” and as their music floated into infinity over the mountains, I imagined that cattlemen miles away on the rolling plains might hear a glimmer of a note or two.

My family and I drove 400 miles from Hardin to see the show and it was a trek well worth it. The best moment of the night came when I got right up against the railing at the front of the B-stage, very close to the Sacred Plexiglass around Charlie’s drum set. I’ve joked in a Stones online forum that the Plexiglass is magical, all-knowing and determines and displays each show’s set list on its own. I adopted my nickname, “plexi”, to acknowledge its divine nature and legendary properties and I use a lower case “p” out of respect. To be that close to the venerable partition and to clearly see the set list’s handwriting on the clear wall was a big thrill for me. 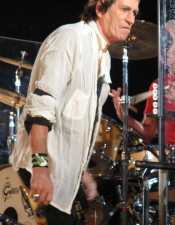 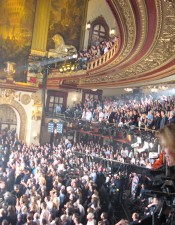 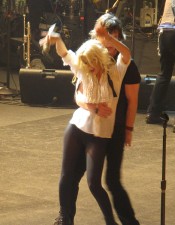 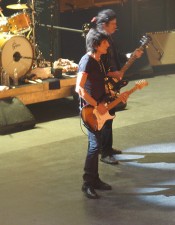 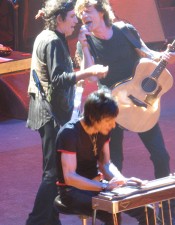 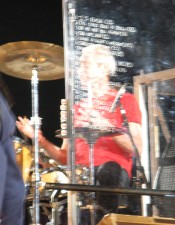 The tour thrills grew exponentially just a few weeks later when I was on my way to one of the most amazing Stones gifts that still keeps on giving.  But receiving this gift was no small feat and it became quite a crusade to get it.

The Rolling Stones were playing two live concerts at the Beacon Theatre on October 29 and 31, 2006 and I was determined to get into one of those shows, no matter what the odds–or the price.

I’ve seen the Stones 45 times since 1975 but only in stadiums and arenas and I’d been shut out of the small show in Los Angeles at the Wiltern Theatre during the Licks tour (November 4, 2002) where the late Solomon Burke was a guest star. I only heard snippets of the concert from a nearby parking garage when the roadies opened the back door of the venue to take gear in and out.  I didn’t want to face such dreadful disappointment again.

The Beacon Theatre shows were quite the significant set of concerts to anticipate.  They were being filmed by Oscar®- winning director Martin Scorsese for the IMAX movie Shine A Light.  They were a 60th birthday celebration for President Clinton and a fundraiser for the Clinton Foundation. Not only would the concerts feature legendary guest stars, an amazing set list and an audience of Hollywood and D.C. royalty, it would all be immortalized on the silver screen!

Here’s where their lyrics “you can’t always get what you want but if you try sometime you’ll get what you need” really rang true.  After failing to get tickets online when they went on sale, I had to pay a ticket broker big bucks for my ticket. I definitely felt scalped.  But I also felt lucky to get a ticket at any cost and I happily flew to New York for my biggest Rolling Stones adventure yet.

I was there for the second show originally scheduled on Halloween, but Mick had problems with his throat and they postponed the concert until Wednesday, November 1. It was rather uncertain if the show would go on at all but I had to wait it out, which meant extending my hotel stay and changing my flight.  I was already in for a pretty penny and now I was in for a lot more bucks.

No matter. I was elated and more than ready to go to the show when it was confirmed. It was an incredible defining moment when I had the wristband put on that gave me entrance to the fabled concert.  I hoped we could take photos, so I bought a digital camera near Times Square for the event. I didn’t realize that it didn’t have camera card in it until I got to the venue but luckily a friend of the ticket broker took pity on my plight and lent me hers.

My seat was in the front row of the loge (the lower balcony), the last seat on stage right (Ronnie’s side) and I had an unobstructed view of everything in front and below me. I could see that they removed several rows of seats to lay dolly tracks for the 35 mm cameras used to film the shows (the images were blown up for the extra-large IMAX presentation.)

The front of the stage had a catwalk in the center with wings on the left and right, jutting out into the crowd. The theatre is resplendent with art deco architecture, which is showcased by an enormous crystal chandelier suspended from a gilded ceiling. What an incredibly grand and decadent setting for such special Rolling Stones concerts!

The Beacon is also known for its flawless acoustics and was designed as a silent film showplace, opening in 1929. The 2,894-seat, three-tiered movie palace evolved into a concert hall and welcomed the Stones once before, albeit in another format.  It was the first concert venue outfitted for IMAX for the premiere of the film The Rolling Stones at the Max, in December 1991.

I was among very special company but right from the opening chord of Jumpin’ Jack Flash it was as if it were just the Stones and me. I was in rock ‘n roll ecstasy hearing tunes I never heard live before, like a kick-ass She Was Hot.  Their version of All Down the Line was the best one I had ever seen, going back to, and including, 1975.

Besides the incredible music, the guest stars made the concerts extra stellar. Jack White had some worthy guitar chops on Loving Cup. Christina Aguilera and Jagger were hot together during Live With Me where her vocals were raw rock, showing her impressive range (she and Mick had the same vocal coach.)  Buddy Guy’s rousing rendition of Champagne and Reefer, a tune Muddy Waters made popular, is a brilliant duet with Jagger.  And Guy traded some crazy riffs with the human riff himself- Keith Richards.

I was mesmerized by this amazing concert and I couldn’t believe how uniquely different it was from stadium or arena Stones shows.  The real audience – the real fans – were really getting into it, singing, cheering, clapping and dancing.  The fake audience, the models who were hired to wear Stones tees and got the prime seats in the orchestra, didn’t even know the song lyrics or when to clap.  It was so very Hollywood to have starlets in the first row of the Beacon getting paid to pretend to be Stones fans. 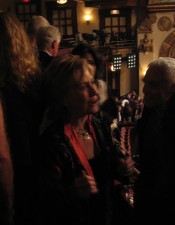 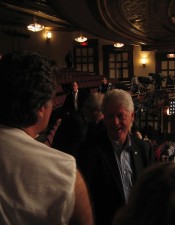 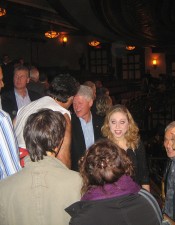 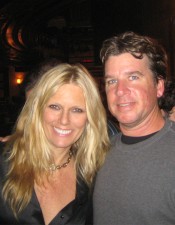 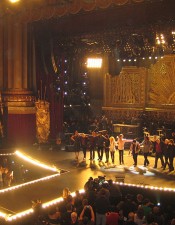 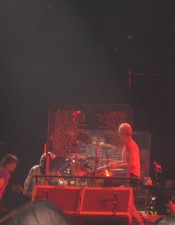 This very real Stones fan was able to take lots of pictures that I knew I would treasure as a memory of this two-hour show that seemed to flash by. I was cheered to know that I’d get to re-live most of it again once the movie was released.

Shine A Light opened in theatres on April 4, 2008. Taking its gospel title from a song on Exile on Main Street, the movie is a full-out rock concert with some fun “rockumentary” moments, like Mick fretting over the placement of the 16 cameras and Keith sweetly kissing Hillary Clinton’s mother at a meet and greet.

The two-hour rollicking rock flick is interspersed with documentary-making details, backstage antics, contemporary interviews and TV and film interview footage from the band’s early days.  Shine A Light illuminates how much fun they had as rock stars throughout their career.  Except for the part about the drug busts, and the addictions, and the persecution and the arrests.  But hey, it’s only rock ‘n roll.

It ends on a touching note with a memorial reference to Ahmet Ertegün at the end of the credits. Just before the October 29 show, the 83-year old co-founder of Atlantic Records and chairman of the Rock and Roll Hall of Fame, left the backstage VIP social area, the “Rattlesnake Inn.” He went to the restroom where in the vestibule he tripped and fell, striking his head on the concrete floor. Ertegün was rushed to the hospital, and died on December 14, 2006. Shine A Light was dedicated to his memory.

I was extra eager to finally see the film, especially after I found out that the concert footage was from the second show, my show.  But it wasn’t shown anywhere in Montana, so on a visit to my hometown of Sacramento, California, I saw Shine A Light with my wife Claudia. The first time was on a regular movie screen but the second time we got to see it in all its glory in an IMAX theatre. Watching it on a screen the size of a basketball court detailed a huge surprise that represents one of my pivotal moments as a Rolling Stones fan. There I was! On camera and on the same giant IMAX screen as my idols!

My wife spotted me the first time we saw it on the small screen. Suddenly, a short way into All Down the Line, she exclaimed, “I see you!” but I missed seeing me standing and watching the show.  A couple of seconds later the camera pans to my corner of the loge and I do see me. What a rush!

I’m wearing my long-sleeved white t-shirt that reads “Stones Rock Missoula” in big black letters and my white Stones baseball cap and I’m fooling with my camera, of course. Seconds later there I was again. I couldn’t believe it! I was stunned, I didn’t think you’d ever see me way up in the balcony. But you do see me quite a few times.  One of the coolest shots is during Satisfaction where I’m aiming my camera and then the flash going off and you see the orange light.  From the theatre seats I took a picture of myself on the IMAX movie screen, using the very same camera as the one I used at the concert itself. 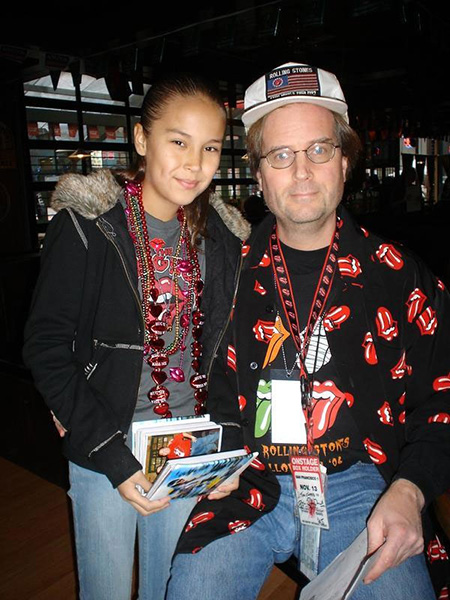 Some Rolling Stones friends from far and wide emailed that they spotted me in the audience. Along with my wife, my daughters Whitney and Nicole are Stones fans too and they enjoy the bragging rights of their dad’s appearance in a famous flick. As a family, we enjoy as many Stones experiences together as possible. Nicole (the “small god”) texted in the set list from the Missoula show for immediate posting on fan sites. And Whitney has Keith, Mick and Ronnie guitar picks, which she proclaimed in a seventh grade essay are her most prized possessions and she’d save them first in a fire.

My family understands how elated I was about my other magical Stones adventures, like meeting Ronnie at his art show in Denver and Charlie at the hotel in Vancouver and having onstage seats for A Bigger Bang in San Francisco.  But one of the eminent experiences of all time is my immortality with the Rolling Stones in a Martin Scorsese film. Being captured on celluloid with the Greatest Rock ‘n’ Roll Band in the World is, for me, a very bright and light-shining rock ‘n roll moment!