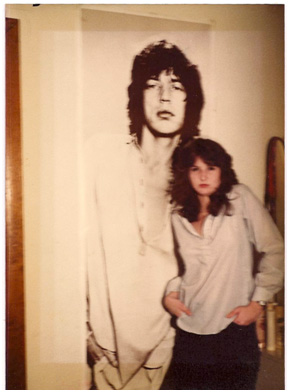 Sometimes being an Artist means baring your soul. Even if it means exposing something so personal to strangers…here goes:

Music— our life’s soundtrack. Through music we find a sense of self. Sometimes it’s empowering. It can give us courage, peace, a friend.

As an artist we tend to gravitate to what connects us to life, inspires us and moves us into action to CREATE! For me, I have a very deep connection to music….specifically, to Mick Jagger. Going back to 1975, I was 10 years old. Still enjoying recess! Not your average kid, I looked forward to going home and spinning my records. I loved The Rolling Stones.

Not just loved — I absorbed them! Studied them. I could do a wicked Mick impersonation like no one EVER! And I entertained my friends for many years on dance floors with my Mick Moves (I used to be just as skinny)! What you see on this canvas below is the accumulation of 38 years of love and devotion.

As a developing Artist growing up in the ‘70s, I was a latchkey kid that formed sensitivity to the world around me. Not just with music, but with people, and relationships and how they all intertwined in my life. I witnessed the heartbreak of my parent’s divorce and being bounced from home to home throughout junior high and high school.

Sadness/loneliness could have been the main theme in my life. Instead, I managed to escape into my music, which gave me that sense of having a foundation. It was my ‘constant’.  I believe through these rough times I developed a way to cope by finding joy and beauty through it all. A sure recipe if you ever want to create an Artist.

Mick! My love for him began when my older sister, Kimberly, a high school student on the tail end of the hippie days of 1975, introduced me to all the great bands of the decade. I remember her pointing to her Circus magazine, “Check him out, that’s Mick Jagger, he’s the lead singer of The Rolling Stones, he’s AMAZING!” That’s when it stuck. And from that time on, he became my muse.

The voice and the face are a source of security and even pride, a part of my own identity. My definition of sexy. Every man I ever encountered had to measure up to him. Which would easily explain my first ‘love’, a clone of Mick from the 1975 era. Same hair, same eyes, same LIPS. I’m a new kid in a new high school. I passed him in the hallway and locked eyes. I almost FAINTED. It became my mission to meet him. It became a 16 year old Rolling Stones fan’s dream…to date a Mick look-alike. That was fleeting as young love is.

I’m 18 in the pic of me and Mick, in my off-campus apartment as a first-semester freshman at The University of Akron in fall, 1983. As I went on to college and marriage and parenthood I never, ever swayed from my love of Mick Jagger. My wonderful husband of 25 years understands the origin of this craze within me. And I am free to swoon and be 18 again, whenever I feel the urge. We have three kids who grew up being tested. ”Who’s that singing on the radio?” ”Mick Jagger Mom!” 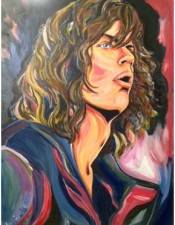 This Mick portrait I painted started out as a freestyle painting. I didn’t do any graphing or sketching before hand. I wanted to just put the music on and let the brushes fly…all was well with my world! UNTIL- I stepped back and did not see what – to me – was ‘right’. It had to be ‘right’; it had to have the essence that I feel is Mick Jagger. It took thousands of brush strokes and months and months of labor before I felt it was ‘right’. In many ways it was cathartic for me, and secretly I don’t think I ever wanted to stop working on it. This is why it took three years to get it so very ‘right’.