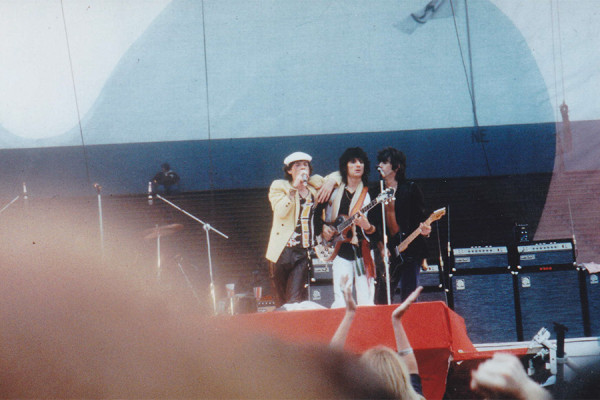 Some things in life never change and when it’s time for a Rolling Stones concert, well, you gotta move! Stones fans are well known for getting caught up in the frenzy of excitement and my trip from North Adams, Massachusetts to Philadelphia on June 16, and to the show on June 17, 1978, was no exception.

I even managed to talk my Mom into the all-day trip and we took Amtrak with my pal and newest Stones disciple, Stu Miller, who was soon to hear how I took one huge hit to the body in the front row at the show.

Philadelphia has always been a major StonesCity; fans there really show up in a grand way when the Boys blow into the City of Brotherly Love. The train trip down to Philly was one big Stones-fest! Radios and cassette players blared “ Some Girls” non-stop—-yes, I did say cassette players—- it was 1978 after all!!

Confession time: I’m a diarist and I’ve kept a journal since the age of five, so the details that I provide in this piece have been extracted right from the pages of that journal. That’s how I know we stayed in rooms 1901 and 1902 at the Holiday Inn on Walnut Street!! Once at the hotel, the festivities continued with every room filled with Stones fans. Coolers littered the corridors, t-shirt vendors sold their goods on every street corner—the town resembled New Orleans during Mardi Gras!

It was such a fun pre-show party that my Mom announced she was going to the show with us. Well that’s one way to grind the party to a halt. She had no idea what she was asking for, there was no way my mother was ready for what lay ahead. I managed, after quite a debate, to buy her off with a handful of money so she could shop herself silly instead of going to a “boring ole Stones show.”

Saturday, June 17, was a miserable, cool, drizzly day and we made our way via subway to JFK Stadium along with 100,000 other Stones people. Spirits were slightly dampened but not entirely. Clutching our $12 General Admission ticket stubs we made our way slowly right to the very front of the stage!

Weaving through the dense crowd towards front and center is no small feat but for a devoted Stones fan/photographer like me. It was very satisfying when we finally stood right in front of the three mics set up for Mick, Keith, and Ronnie. Despite the coveted spot, a steady drizzle continued and made me madder than a wet hornet, especially since the crowd was really pounding the booze. It was an even drunker Stones audience than you usually find at a stadium show, it must have been the rain that made the whiskey go down easier. 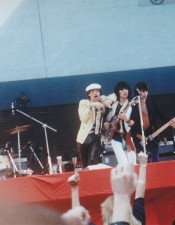 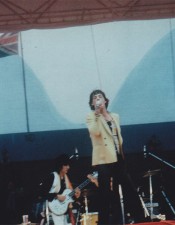 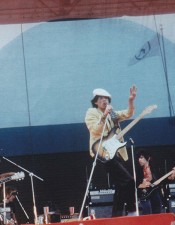 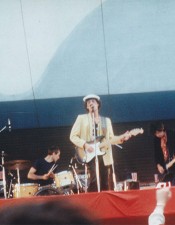 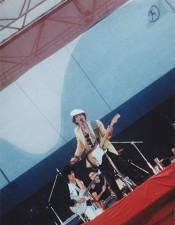 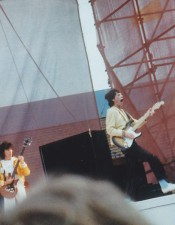 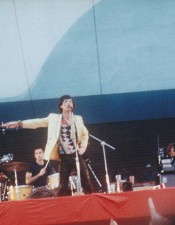 By the time Peter Tosh took the stage just after 1 p.m., the rain had stopped— (-thank you, Jesus thank you, Lord!) This ex-Wailer did himself proud! By the time he finished “ Get Up, Stand Up”, and “ Don’t Look Back” the crowd was showing signs of agitation.

Foreigner was up next and played a very lively set from 2 to 3 p.m. For some reason, the crowd didn’t get into them at all. Lead singer Lou Gramm tossed hotel keys right over my head, ” Shall I leave you my keys?”  Guess not!  And then the anticipation took over and the rowdiness increased along with my anxiety. I probably was the only one in that crowd not drinking an alcoholic beverage. Hell, I drank coffee, I was freezing!  How to stand out in a Stones crowd – clutch a cup of coffee! In hind sight I would have ditched the coffee and taken out that joint I had packed in my purse.

At exactly 4:15 the Stones ran onto the stage and it was instant pandemonium!!  If you’ve ever lived it,  then you know that being close to a Stones stadium stage is a totally outrageous rock ‘n roll experience. Beer splashing all over, flailing limbs, mosh-pit madness! It was a debauched rock mob scene and I got separated from Stu right from the opening notes of “ Let It Rock” until the end of the set. Let it rock indeed.

Now, I’ve read the reviews of this show and critics were not very kind but I’m here to tell you that it was a fast, tight, almost manically paced set from start to finish. Mick was a bit hoarse and he was not as engaging with the audience as I’ve seen him at other shows but I found out the reason for this the next day; the Philadelphia Inquirer revealed that Mick had the flu and had performed with a 103 degree fever!! Many other artists in Mick’s position would have simply cancelled the show but rather than disappoint his fans, he went on with the show. Very commendable indeed!

This was an unusual tour because the Stones loaded the set list with new material from their newest album, “ Some Girls.” Included that day were the following tunes from that collection: “Respectable”, Miss You”, Just My Imagination”,  “ When The Whip Comes Down”, “Beast of Burden”,  “ Shattered,”  and “ Far Away Eyes.” That song was almost the last song I ever heard and Mick’s powder blue socks were almost the last thing that I saw before near annihilation. Literally. Yup, my final earthly vision may have been Mick in all of his glory, sitting at the piano singing “ Far Away Eyes” in white blazer over brown and yellow tank top and brown leather pants. And those blue socks!

The crowd surged, catching me off guard, and down I went face first, kissing dirt.  My breath was knocked out of me and I felt helpless lying there on the filthy, wet ground. There was no way I could get myself up. My fate was in the hands of the Rolling Stones Philly fans’ feet. I feared being a victim of  “herd behavior” and trampled to death – or worse.

Enter Ed Troy, my HERO! Ed was a fellow I’d been chatting with and sharing my food with during the show. He reached down and pulled me to my feet, screaming expletives at the riotous crowd and telling them to “BACK OFF!” Wow, that was impressive! This was honestly the first and only time in my Stones History when I feared for my life. I owe Ed an eternal debt of gratitude, he saved me from being crushed and becoming just a memory. I looked for my friend Stu once I had recovered and he was bug-eyed, totally horrified by my account but of course relieved to see me standing.

The most amazing thing was that through this entire episode, I continued to take photos! Well, of course NOT when I was unwillingly prostrate at the altar of our gods. I actually produced some of my best pictures to date from that show. Some are a tiny bit out of focus but given the circumstances, they’re not too bad. That night I wrote in my journal that I regretted not taking more shots and I wondered if I got “ anything of value.”

In the good old days, way before digital photographs, you did not have the opportunity to delete bad shots and edit. I was shooting slides that day for clarity purposes which I later developed into glossy photos. Days later my hands were actually shaking when I opened the envelope containing my pictures. RELIEF!! I had photographic evidence from that memorable show!! I even remembered snapping the photo when Mick leaned over to Keith after a shabby audience participation attempt —–Shidoobee—Shattered—Shattered-and said, “AH, Fuck it, Keith!”

My journals are my prized possessions above all else because  they transport me back to all of my life experiences and included in this vast category are my detailed accounts of all 36 Rolling Stones concerts.

I know that I have been so blessed. The Rolling Stones have taken me to heights that are really beyond description. Close friends have asked me what I’ll do when the Stones officially call it a day. When I see that final bow, how will I deal with that? I didn’t have a quick answer. I know that it will hurt like Hell. I will feel like a major part of my life has ended. Literally.

But on the other hand I think about what my life would have been like had I not followed this band since the early 60’s. I have experienced such passion, love and euphoria because of the Rolling Stones and all of it is preserved in my journals and dozens of photo albums. When my memory starts to fade, I have a back up – .and oh, what a comprehensive back up it is!!  I really believe that this band that we know as the Rolling Stones shall “ Not Fade Away” We’ll make sure that they don’t. After all, they’re to die for.