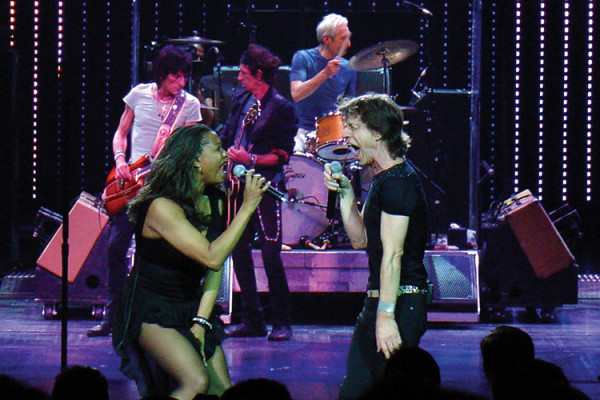 The Rolling Stones have a great relationship with New York City and as a boy from Yonkers I’ve had my fair share of Stones adventures in the Big Apple.  Beginning in 1965 at the Academy of Music (now the Palladium), and right up until their appearance at Radio City Music Hall on March 14, 2006, I was in the audience for some legendary New York performances, including the Ed Sullivan and Hullabaloo TV shows.  I was able to gauge the band’s evolution over these past forty plus years from a unique New Yorker perspective.

When my friends gave me a surprise party for my 17th birthday in the summer of ’64, my most meaningful gift was a copy of the Stones first album released in the US, “England’s Newest Hitmakers”.  The opening chords of “Tell Me,” the first song writing collaboration between the future Glimmer Twins, Jagger/Richards, completely resonated with me.

I took the LP to college the next year but only a few others there were into the Stones music, so I didn’t have much company on November 4, 1965, at the Lowes Theatre in New Haven, where the Stones showed me what they could do live for the first time.  I was drawn towards the front of the stage like a magnet during “The Last Time,” but the audience was so out of control, with girls being pulled off the stage by security, that I retreated in a hurry.

Two days later I would see them again in an afternoon concert at the Academy of Music, where they performed the same show and were all wearing the same clothes.  I still remember thinking that Brian’s plaid pants and black turtle neck sweater were so hip, not like the Beatles in their square suits and ties. He always made a lot of eye contact with the crowd and played his Gibson Firebird low. I always thought he was the coolest Stone.

Tickets were $3.50 and my seat was in the middle of the balcony, a perfect vantage point to see them – but not to hear them.  With their inadequate amp-driven sound systems combined with the screaming audience, they were barely audible. After the show, the Stones went to Philadelphia, Pennsylvania, to perform an evening concert as part of the Dick Clark Caravan of Stars.

Thanks to a friend who knew I was a huge fan, my first chance to be in the audience for a TV appearance was for Hullabaloo, a musical variety show that was taped in Brooklyn on November 11, 1965 and aired on the 15th.  A short clip was shown from “Charlie Is My Darling”, a U.K. documentary on The Rolling Stones’ 1965 two-day Irish tour at the height of Stones mania. 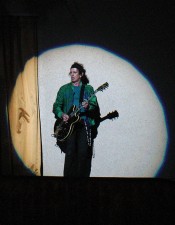 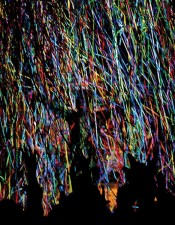 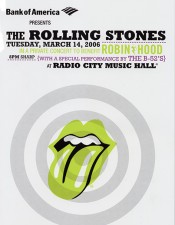 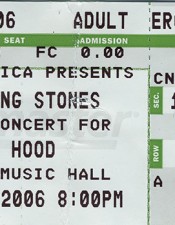 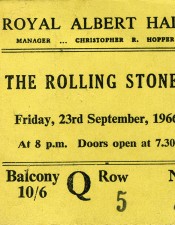 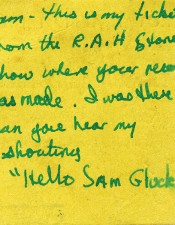 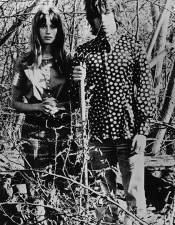 I watched it all, live, from back stage, which was very exciting with the comings and goings of the various acts and an up-close-and-personal view of the sexy Hullabaloo dancers.  I also saw the Stones tape a promo that replaced the usual show open, which typically featured the dancers.  Instead it showed the band bowing on the show’s set while an announcer teased the viewers to stick around for more.

Their image was quite different when I would see the Stones live again on July 2, 1966 at the Forest Hills Tennis Stadium in Queens, New York. They were more rocked out; they dressed better and seemed more like rock stars. They definitely had more of an attitude on stage. And they most definitely had better transportation; I watched them come and go in helicopters that landed and took off behind the stage.  There was also the usual terrible sound and complete bedlam I’d come to expect and participate in.

Another friend was able to arrange for me to go to the afternoon taping on September 9, 1966 for the Stones appearance on the Ed Sullivan Show, which aired on the 11th.  Usually the musical guests are live (more or less, if you count pre-recorded backing tracks with live vocals), but Brian had injured his wrist and couldn’t even simulate playing.  I remember Brian sitting on a platform during “Paint It Black” with a bandaged wrist, trying to pretend to play his sitar.

I also attended the Ed Sullivan Show rehearsal on January 15, 1967, which was their infamous performance where Mick caved into censorship and changed the words of “Let’s Spend the Night Together” to “Let’s Spend Some Time Together.”  With live vocals over pre-recorded tracks, that’s exactly how they rehearsed it that afternoon, and sang it live that evening, as per Ed Sullivan’s personal request as to not offend any virtuous Americans.

In my high school there were some girls so in love with the Stones that they convinced their mothers to let them stay in the hotel where the band was staying during their Carnegie Hall (and first New York) appearance in June, 1964.  Urban legend has it that one of the girls got to make out with Brian Jones.  Because of that rumor (and because she was hot), I pursued her and became “the guy who made out with the girl who made out with Brian Jones.”  Brian made the Stones unique with his personal and musical style and talent to learn instruments like the sitar and the harpsichord.  And there’s no question that he was the best slide guitar player in England.

When I saw the Stones for the first time without Brian, his replacement Mick Taylor rocked MadisonSquareGarden in November 1969.  They had undergone another transformation into a different kind of rock band.  I thought Mick Taylor was a perfect fit musically and with him on guitar there was a distinctive quality to the Rolling Stones; they were more focused and stronger.

Little by little through the years their sound was transformed over and over. With the “new guy”, Ron Wood, the Stones evolved yet again.  He’s been with the band over 30 years now, perfecting his craft so well that his licks take the band to a whole new level.

And he demonstrated that lead guitar prowess most notably during “You Got Me Rocking” at the Robin Hood Foundation benefit at RadioCityMusic Hall during A Bigger Bang Tour.  The concert raised $11 million and the Rolling Stones made the “suits” delighted that they paid up to $7500 for a seat.  They performed with the same energy and intensity as the band that I first saw play for $3.50 a seat.  And it reminded what I’ve noted these past 44 years: the more the Rolling Stones change the more they remain the same.