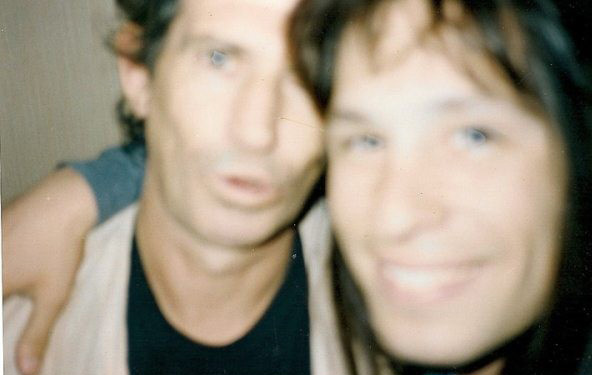 It took a long time for the Stones to finally tour South America and the dream of my lifetime was to see them on stage.

In November 1992, I got very close to a part of my dream coming true. Keith Richards came to Buenos Aires with his solo band, The X-Pensive Winos, to promote his second solo album, Main Offender. I was ecstatic, finally a Rolling Stone on our shores! He would rehearse here for four days and then play for 45,000 fans on November 7 at the Estadio Velez Sarsfield.

I wanted to go to the airport just to see him arrive, even if only for a few seconds. But a local disc jockey told me that Keith was already in my city and that he had an interview at the radio station. Many people were already gathered at the station door when I got there. I saw him coming out of the van with a couple of bodyguards. He did the radio chat, and then waved good bye to everybody as he left for his hotel for a press conference.

I took a bus to the hotel where there was a huge crowd outside waiting for our idol. I asked an employee where the press conference would take place and he told me it was on the last floor.

Two guys with IDs hanging from their necks, came out. I asked if they were part of the crew. They were puzzled, they didn’t know why so many people were singing outside. They were doing unrelated work on the second floor, so I told them that I wanted to attend the press conference. They agreed to escort me to their floor and took me through the main lobby where there was a lot of security. But on the second floor, nobody!

I got into the elevator and pressed the button for floor 24 (the last number). On the way up, it stopped on another floor and someone got on. He was an African American guy, he looked like a musician. My English was not very good then, but I asked if he played with Keith, he said “yes”. I said: “You can take me.”

He didn’t say anything but he smiled. We arrived at 24th floor to find two young ladies at a desk. He introduced himself and one of the girls pointed to a hallway. We started walking and I introduced myself and gave him a handshake. His name was Babi Floyd and he was a backup singer.

At the end of the hallway was a huge security guy guarding the door. Babi told him that somebody was waiting for him in the room. The security guy checked the list but Babi wasn’t there. The singer asked him to double check, and the tough guy told him again that he wasn’t on the list.

On the other side of the door, somebody was listening. He opened the door and there was Keith! He greeted Babi with a big smile and a big hug. I gave Keith a hug, kissed his cheek and followed them in.

His band was there, so I tried to give a handshake to one of them, but Keith grabbed my arm very gently. I told him that I just want a picture with him and then I would leave. He told me: “Yes, let’s take the picture in another place” and he took me to the hallway. 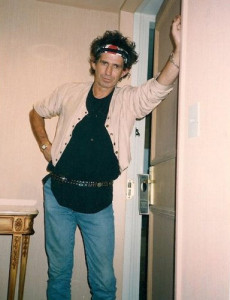 The security guy was pissed that I was a main offender and he refused to take the picture. So I hug Keith, he hugs me, then I aimed the camera, so I hug him again, he hugs me again and I snapped the shot. I was nervous, my hands were shaking, so the picture is in motion.

I hugged Keith again, he posed for me and I took another picture of him, this one is perfect. Before he said “bye bye,” I kissed him again and told him that I can’t believe it and that I was a hardcore Stones fan. The security guy asked me how I got there and he said that I shouldn’t tell anybody about it.