Masters of Music: Stones Tribute Is An All-Star Bash 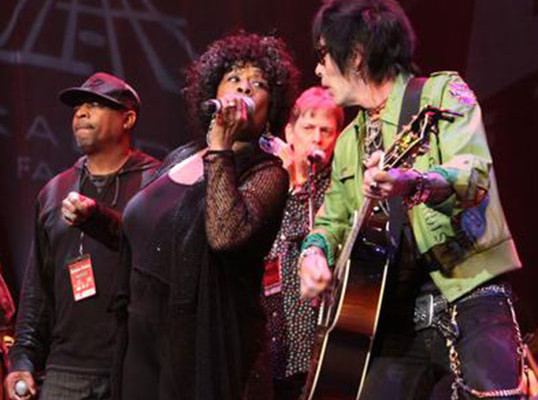 The New Year brings memories and reflection on the best parts of the old one, and with the Rolling Stones on tour in 2013, well, that’s gotta be any fan’s highlight! Me included – all thanks to the 14 shows I rocked to on 50 and Counting…

Last year I had another Stones-related concert experience that turned out to be an amazing musical event that surpassed my very high expectations – the Rock Hall’s Music Masters Tribute to the Rolling Stones.

Held at the Playhouse Square’s State Theatre in Cleveland on October 26, the show wrapped up a week-long Stones conference with lectures, programs and movies, including “Charlie is My Darling, Ireland 65.”

Musicians performed on Stones classics under the musical direction of drummer Steve Jordan, who has a Stones pedigree like most of the other performers. Steve appeared on the Stones Dirty Work and co-wrote and produced the songs on Keith Richard’s solo album, Talk is Cheap and was the drummer for Keith’s X-pensive Winos.

Friday’s rehearsals at the Theatre were a great glimmer of what was to come at Saturday’s performance for 2,500 fans. As rehearsals usually are, it was a mix of do-overs, tight run-throughs, playful playing and band banter.

In between songs, the band mates joined family and friends backstage watching on monitors (or the sidelines). Sugar Blue’s gorgeous baby, James, was the real rock star and passed around for some lovin’ by the band. The yummy catering and well-stocked bar was up to rock-star standards, and afterwards, about 10 p.m., the fun continued at a private party for about 40 guests back at the hotel.

I was excited to find myself in line at the bar behind Sarah Dash, who sang on Steel Wheels and Keith’s solo projects. When I caught her eye I exclaimed, “excuse me, can I gush a little and tell you what I big fan I am?”

Sarah leaned into me with her hand on her hips and looked at me dead on. “Do you know who I am?” she asked suspiciously.

“Of course I do! You’re Sarah ‘diva-licious’ Dash”, I laughed. “And I’ve followed your career since you were one of the Bluebelles with Patti LaBelle and I was thrilled when you worked with the Stones and Keith. And in rehearsal you totally owned Heartbreaker .”

“Okay, good, thank you.” Sarah was laughing as she hugged me. “People often mix me up with Merry (Clayton).”

“Well here they won’t do that, the fans are thrilled the two of you are going to be together on the same stage to pay tribute to the Stones,” I told her.

Later when Merry Clayton arrived, I had a moment to tell her how much I was looking forward to her talk at the conference tomorrow, praised her vocals on Gimme Shelter and lauded her appearance in the Oscar®-nominated documentary “Twenty Feet from Stardom.”

I also mentioned that co-star Lisa Fischer wished she could have been here as scheduled, but she was on tour with Nine Inch Nails. “I adore Lisa,” Merry said, before being inundated by other admirers and whisked away.

The party had an air of anticipation as the band mates mixed and mingled with each other and guests. As there seems to be at many of the rock ‘n roll-related party I’ve attended, there are those fans who somehow get in without a pass (crashed it?), get smashed on the free booze and assault the rock stars. This night did not disappoint with an interesting side show of a couple of badly behaved fans to amuse me, but who were not amusing the artists they accosted. The evening fizzled out after a couple of hours; there was a big show the next evening and the band acted accordingly.

At the venue on Saturday night, the fans flooded the event from all over the world but it was a mainly Cleveland audience and, as per usual at these kinds of events, the sponsors and donors were in the best seats in the house, vs. the real fans.

The show got a heart-felt introduction by the Rock and Roll Hall of Fame President and CEO, Greg Harris, who is a true-blue self-proclaimed “Stones guy” from my hometown of Philadelphia, where he owned a used record shop that I regularly scoured for my collection.

Greg had his own battered vinyl copy of Exile on Main Street and a story of its origin to add to his fan cred, and he noted that tonight he would let the “songs tell the story” of the Rolling Stones. 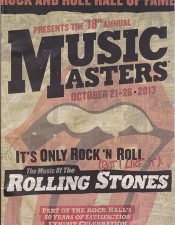 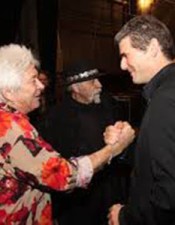 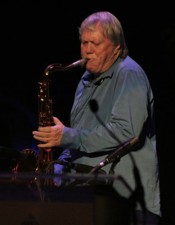 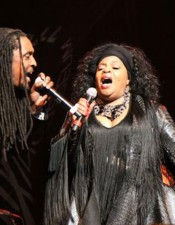 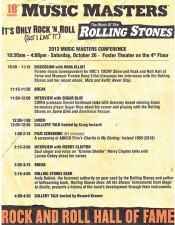 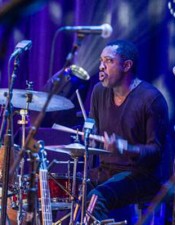 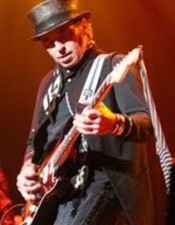 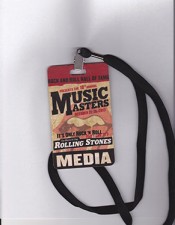 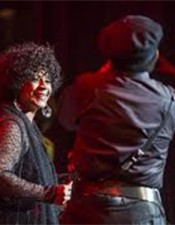 There were also plenty of video clips of the Stones through the years, with a narrative telling their story throughout the show, which caused a bad case of musices interuptus – the show lost its momentum until the band came back and built it up again.

Apparently the Stones were the first honorees in its 18-year history of the Rock Hall’s Music Masters Series concerts to have ditched playing the show live. But when the Theatre was jumpin’ with the tribute band jammin’ and doin’ the Stones music proud, the discography did speak for itself.

Along with Bernard as the principal male vocals for the show, and Waddy wailing on his guitar, the night had some other special highlights for me: Earl Slick opening with his hot licks on Brown Sugar; Nils Lofgren, front and center for a soulful Play with Fire, who stayed onstage all night switching from his Strat to lap steel guitar; and Sugar Blue, strapped with harmonicas across his chest, getting multiple standing ovations during Miss You and Little Red Rooster.

The show was filled with surprise exceptional performances from artists I’d never seen live before and didn’t expect could hold their own in that roster of top musicians, like Lee Fields on Moonlight Mile and Dave Pirner on Dead Flowers and the Flamin’ Groovie boys on Paint It Black.

But it was the magnificent diva Merry Clayton who brought the house down with a monumental Gimme Shelter! And by the time she led us into the finale with Sympathy for the Devil, the crowd was on their feet and dancing in the aisles. Even the boring stiffs in the first row graciously allowed the rocker chicks to rock out in front of the stage!

The after party at the Hard Rock Café had a totally different atmosphere than the night before, it felt effervescent with the artists in great spirits and basking in the afterglow of the amazing show they delivered. They were hugging and high-fiveing each other and many of their wives, girlfriends and other family members were there to enjoy the revelry, open bar and delicious bussed hors d’oeuvres.

Sarah Dash had an entourage that included her sister who creates all of the gorgeous stage clothes she wears. Nils Lofgren’s wife, Amy, was his arm candy, and all the Flamin’ Groovies were there, including the two who didn’t perform in the concert.

When Merry Clayton walked by, right in front of me, I bowed before her, my hands in prayer position in front of my heart. She laughed and asked “what’s your name, baby?” and when I told her, she leaned in and whispered “Oh, Mary, just like me!” Beautiful buzz!

The Hard Rock is connected to the same indoor mall as the hotel where the band stayed, and at 2 a.m. the party was over and the guests didn’t have far to travel, until the next day when everyone scrambled to make their travel connections home.

When I ran in Sugar Blue in the lobby and praised his talent on the harp, he told me that he didn’t realize he got so many standing ovations during his performance. “I didn’t even know until my wife told me. I was in my zone,” he laughed.

That’s what Rolling Stones music does, it puts you in that zone and when you’re there, you are mesmerized and hypnotized and you don’t even realize it. Music Masters indeed.