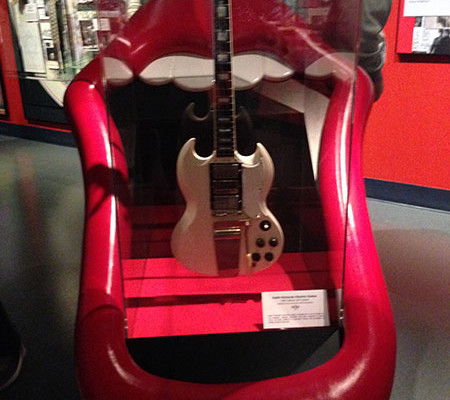 I usually reserve that exclamation for Rolling Stones concerts and five-star hotels, but it was also perfect for the Rock Hall. I told Howard Kramer that the entire museum felt like home for a rocker chick like me, and I could have camped out for weeks in the special exhibit, Rolling Stones: 50 Years Of Satisfaction.

That’s where you take a visually and sonically amazing tour of the band’s history via their music and memorabilia, and you’re totally immersed in an incredible adventure in an exhilarating atmosphere.

“I look forward to coming to work every day, it’s really the greatest job in the world,” says Howard, who has been the Curatorial Director at the Rock Hall for 17 years. And no wonder he digs this gig. He is surrounded by some of the coolest rock ephemera and the greatest music in the world and gets to look for more to showcase.

“The band has been involved here since even before we opened (in 1995). When we wanted to do something on a larger scale for their anniversary, (the Stones) gave us the approval for the use of their image and logo and opened up their vaults,” he explained.

Howard and the team dug through the Rock Hall’s own collection and when they reached out to the band, the Stones made a significant contribution with costumes, guitars and gear. The team used their collective world-wide contacts with musicians and collectors to round out an amazing exhibit that will impress every fan, from casual to obsessive.

Howard Kramer is a fellow Philadelphian who was an on-air personality here for WXPN-FM radio and a Stones book author. He’s a hard-core Stones fan who was perfect for the challenge with his passion and expertise on Stones history. He worked with head curator Craig Inciardi and curator Meredith Rutledge-Borger for about eight months from start to finish, creating and installing the exhibit.

As Howard described scoring the guitars for the exhibit, his excitement was contagious. These are the absolute jewels in the crown! And when I saw Brian Jones’ famed Vox custom white teardrop guitar up close and personal under the Plexi-glass, well I gasped and got misty eyed. There it was in all its glory, that beautiful instrument whose sound helped define Brian’s/our band. 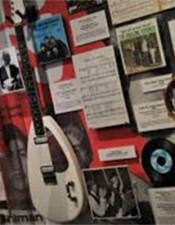 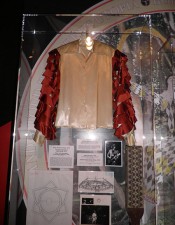 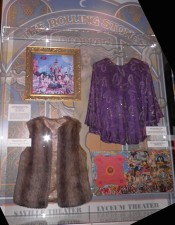 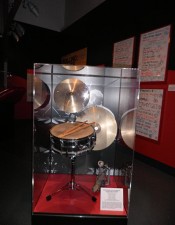 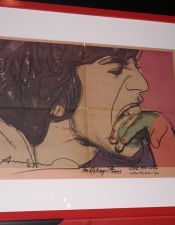 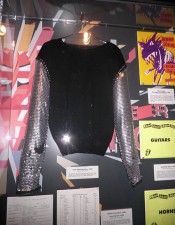 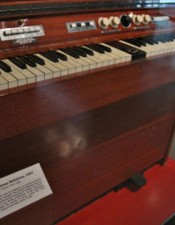 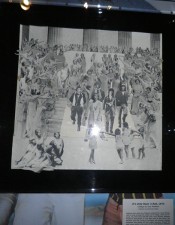 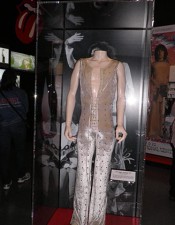 It was fascinating for me to see many meaningful Brian relics, like his Mellotron, used on “We Love You”, and on “Jumping Jack Flash”, and his dulcimer used on Aftermath‘s “Lady Jane”, and “I Am Waiting.” A few of the things were eerie, like Brian’s funeral program and tribute poems by a then-unknown Patti Smith and the Doors’ Jim Morrison.

All of these brilliant treasures, and so many more, unfold upon entering the exhibit by stepping through a doorway framed with ruby red lips, á la the Stones’ tongue-and-lips logo. As you part the black curtains and enter into another land, giant, era-related (and often rare) Rolling Stones posters serve as the backdrop for each case of artifacts.

The band’s timeline these past 50 years and their personal and musical history is laid out in perfect progression – even before the band played their first gig – showing how they evolved from a Blues cover band to the prolific songwriters and performers of today. A loop of Stones tunes is the sound track for your journey.

There are so many cool, unusual visuals that tell the band’s story, like Mick’s French class workbook, concert posters as early as 1963 (from the Gaumont Theatre), rare documents, like the band’s first recording contract, and other mind-blowing personal items that fill two floors, which is connected by a spiral staircase lined with variations on the Stones tongue.

The signed toy guitars on the wall in one case were a cartoonish contrast with the many Plexiglas tongue-shaped displays of Keith Richards’ famed, magical guitars, as well as Ronnie Wood’s Tony Zemaitis custom-made reflective Les Paul-modeled guitar, where, on close inspection, you’ll find Ronnie’s Stones-related etchings and carvings on the silver facing.

The stage outfits were captivating to see and to imagine touching: like the mariachi jacket that Charlie Watts wore in 1975 with those big, layered sleeves that used to dance when he drummed, or the red shirt Keith wore on stage at the infamous Altamont concert in 1969. I wanted to try on and model his black chain mail-sleeved shirt with tears in the right sleeve, which Keith caught on his guitar strings night-after-night on the 1990 Urban Jungle tour and he ripped and tore right through the metal.

Mick’s floor-length cape stitched out of U.S. and British flags from the ‘81/82 tour seemed larger than life, and my fantasy was to free it from its Plexi-tomb and smuggle it home to wrap myself up in. His Voodoo Lounge tux, complete with top hat, was just inches away from my scrutiny, revealing details I never noticed from the audience, like the intricacies on the lapel trinkets.

But the white velvet jumpsuit that Mick wore in 1972 was probably my favorite stage wear, although it was missing an important attribute – Mick’s bulge. Whoever dressed the mannequin obviously never saw Mick wear the jumpsuit in concert, or focused on it in photos, or they would have made it more authentic-looking (Keith seemed to forget about that detail, too, in his autobiography.) 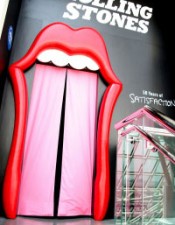 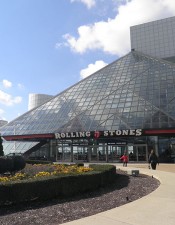 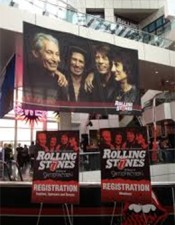 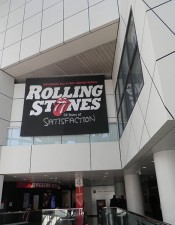 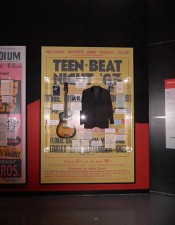 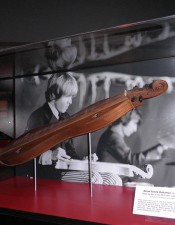 I strolled through this Rolling Stones rock dream experience for about two hours in the late afternoon on Friday with only a handful of visitors to share the displays, but on Saturday the joint was jumpin’ with wall-to-wall conference attendees and fans vying to read the descriptions and play with the digital installations.

There are three interactive areas throughout the exhibition: one showcases the roots of The Rolling Stones’ music and their influences; the second highlights Jagger/Richard’s songwriting; and the third highlights the way the band stayed innovative for 50 years and counting.

Among the fans taking the conference tour, led by lead curator Craig Inciardi, was mega-collector, über-fan and dear friend Tom Beach from the D.C. area. On loan to the museum is Tom’s own Holston Hall Bristol poster from the Stones gig on September 26, 1965, which is in the Rock Hall’s permanent collection downstairs.

The Stones exhibit there is filled with many wonderful collectibles too, including two stand outs: the late guitar tech and crew chief Chuch Magee’s road case, and the Rolling Stones Pinball Machine that guitarist Keith Richards kept and played in his house. Tom Beach’s machine is in much better condition and his collection of rarities he warehoused could fill several Rolling Stones museums. Tom started collecting in the ‘60s and he’s an ephemera expert and a walking encyclopedia of artifact facts.

In Tom’s own personal collection are many of the rare collectibles that are displayed in the Satisfaction exhibit, like the album-sized 3-D original cover for Their Satanic Majesties Request. But he and I both “oohed” and “ahhed” over the album’s four-foot original inner-sleeve with a slightly different design that’s on display.

Another great favorite was the big, original black and white collage of the Rolling Stones 1974 album It’s Only Rock and Roll. Before it was photographed for the final version, the cover’s color was added and the few women whose faces resembled female icons (early shades of Some Girls) were changed.

This exhibit is a once-in-a-lifetime experience that is incredibly laden with Rolling Stones riches. It is the perfect balance of the expected and the unexpected and steeped in historic accuracy. The curatorial team did an outstanding job, and any Stones fan like me who is dazzled by rare ephemera and music that tells the band’s history will be very impressed.

The Rolling Stones were inducted into the Rock and Roll Hall of Fame in 1989 and the exhibit is the first time the museum paid them such special attention. It may be long over due, but it is definitely well worth the wait.

Rolling Stones: 50 Years Of Satisfaction, which opened May 24th, runs through March 2014.

Stay tuned for part deux: The Music Master Tribute Concert, with a report on the conference, rehearsals and pre- and post parties.