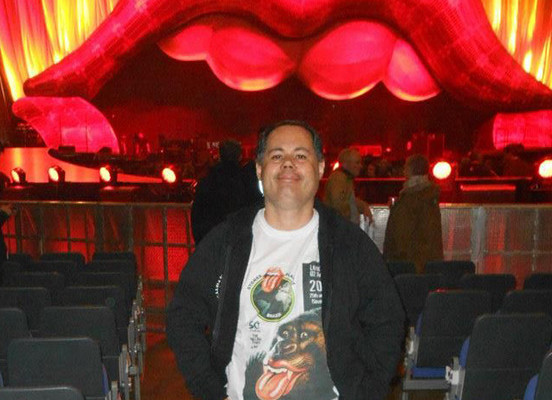 When we hear the slogan “the Rolling Stones are a way of life,” it may seem exaggerated. But truer words were never spoken. Coined in the 60’s by then-manager Andrew Loog Oldham, never before has a marketing motto been so close to reality.

The Stones are more than a band. They were – and still are – the most important artists in the history of mankind, influencing culture and customs, causing an actual reality shock in society since the 1960s until now.

For an eleven-year-old boy growing up in Porto Alegre, a city in southern Brazil, life would have been unbearable without the music of the Rolling Stones. The riffs of “Tattoo You” went into my ears and soon they settled in my marrow. Soon after that, the sounds of the 1981 tour – the old classics and new hits – conquered their place within my soul to become the soundtrack that would follow me throughout my life, even into marriage and fatherhood.

But sadly, the dream of seeing a Stones concert in my country was impossible to realize. The attempt to tour here in 1975 had failed for political and economic issues and the weak South American financial system did not give us much hope. It was not until 1995 that the impossible dream came true. 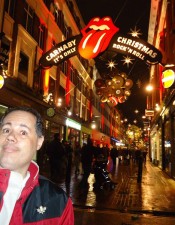 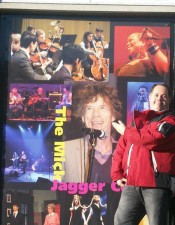 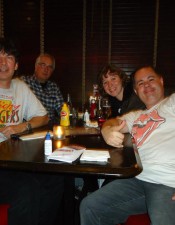 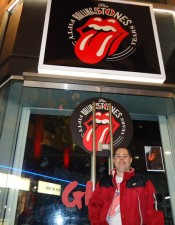 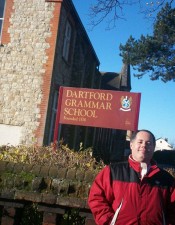 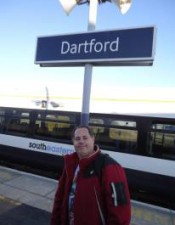 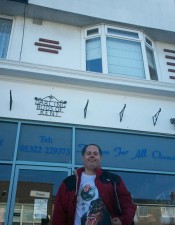 There was true national pandemonium when the Voodoo Lounge tour cast its spell as four Stones concerts were finally announced for Brazil! More than 300,000 tickets were sold for two shows planned for the Morumbi stadium in Sao Paulo, with two others in Maracanã Stadium in Rio de Janeiro. To the consternation of all of us, Morumbi was eventually vetoed as the concert venue in São Paulo.

The options were to cancel the concerts or to find another venue. After a lot of fearful waiting by us fans, three concerts were confirmed at the smaller-capacity Stadium of Pacaembu. So now the Stones agreed to do an extra show in São Paulo. Fear turned into elation, even frenzy as we anticipated the almost unattainable!

One of the most important days in Brazil’s history is January 27, 1995. This date marks the momentous occasion when the Stones played their first concert ever in South America. Some hours before the show there was a big storm in São Paulo, also known as “cidade da garoa” – city of drizzle – for its unreliable weather. The drizzly metropolis completely surpassed its nickname when it welcomed the Rolling Stones.

The Voodoo Lounge stage seemed to crumble from the torrential soaking and there was a threat of canceling the gig. Many people failed to get to the stadium because of the rain, so the stadium was not very crowded for the Stones long-awaited South American debut.

When the band finally took the stage performing “Not Fade Away”, the fans screamed, cried and hugged each other; they were ecstatic and incredulous at the same time. The greatest band in the world was playing for us!

The rain and slippery stage did not allow the band to give its best performance. But the momentum picked up and the Stones put much more energy into the next two concerts, on January 28 and 30, when they returned to the Stadium of Pacaembu.

The South American rock ‘n roll uproar wasn’t over just yet. Brazil would enjoy the gift of two more concerts in Rio where the world’s largest stadium was waiting for the Stones. About 70,000 people attended the first night, on February 2, but the best was kept for February 4, the concert famous for being broadcast live on TV. More than 90,000 people howled at the sound of the band’s hits. Nearly the entire country of Brazil stopped to see the show on TV, while I, and thousands of other voices, sang loudly with Mick in the stadium: “Call me the tumbling dice.”

After the euphoria of the five Stones concerts in Brazil, everyone worried that they would never again come to South America. But magically we needed to wait only three more years. The Stones played two concerts during their Bridges to Babylon tour, one in Sao Paulo and the other in Rio de Janeiro, where Bob Dylan opened the show. For economic reasons, I could only follow the band in Buenos Aires on April 4, 1998, which became famous because the versions of “Out Of Control” and “Saint Of Me” from the No Security live album were recorded that night. I swear I can hear my voice in the crowd singing “You’ll never make a saint of me.” 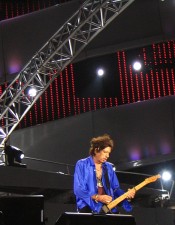 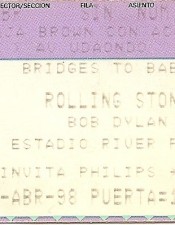 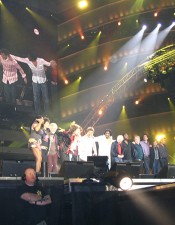 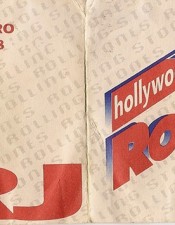 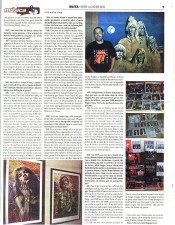 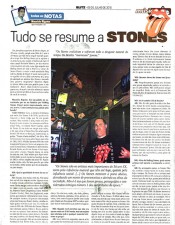 The years went by and every day the need to meet other Stones fans grew large. The internet played a key role in this and I found my ideal partners during A Bigger Bang Tour when I became the South American correspondent for Stones Planet Fanzine, a now-defunct international newsletter. I used my skills as a journalist and interviewed Stones sax player Tim Ries and back-up singer Bernard Fowler for the fanzine. I went twice to Buenos Aires to watch Bernard’s concerts and to write reviews, which really made me feel that I had found the right planet – the Stones Planet.

I was among the 60,000 fans who went wild with the Stones at El Monumental Nuñes, Buenos Aires, Argentina for the February 23, 2006 concert, along with more relentless rain falling down. Indeed it is a unique experience to follow the Stones in Argentina because Argentines are the most passionate and vibrant audience in the entire world. But here goes a tip: if you’re not at full fitness, avoid watching the show on the lawn (or pitch). Choose the bleachers, or else the hysterical wave of the crowd will consumed all your energy. “Come on, Come on, Come on Stones.” Unforgettable!

Despite some financial difficulties, I traveled to Lisbon to watch the Stones in the Estádio José Alvalade on June 25, 2007. It was one of the most wonderful performances of A Bigger Bang tour. The Portuguese fado singer Ana Moura took the stage to sing “No Expectations” in a duet with Mick. A verse of the song was sung in Portuguese and became a historic Stones music moment with Mick vocalizing the lyrics in our beautiful language. I met up with other fans who from far away lands too: England, Germany, Canada, Argentina, and France. We were thrilled to be part of a world celebration for the Stones.

I was eager to share my experiences with the Stones fan world and decided to strengthen the blog that I created to post band news, Stones Planet Brazil (www.stonesplanetbrazil.blogspot.com). Dedicated exclusively to the band, Stones Planet Brazil is gaining identity and establishing itself as the most important channel on the Stones in Portuguese, with about 200,000 visits. 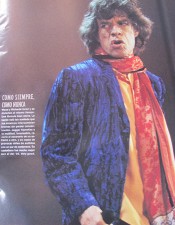 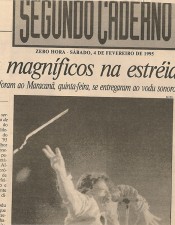 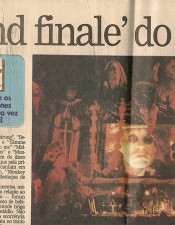 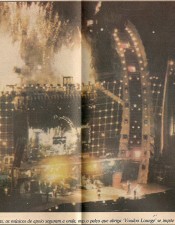 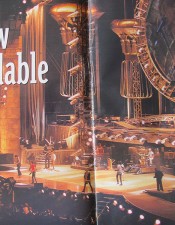 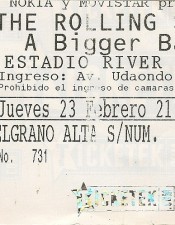 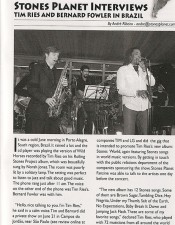 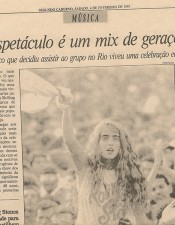 After 30 years and hundreds of CDs, LPs, books, posters, paintings, dolls, shirts and concerts, my passion for the music of the Rolling Stones is getting bigger every day. More than a lifestyle, the Rolling Stones are like water, air or food. They are essential to my life.

And my life got sweeter by one more Stones show for One More Shot at the O2 in London on November 25, 2012, bringing my total now to seven incredible concert gifts of the Rolling Stones, live.

During the past five decades the band rocked recording studios and stages and gave us scandals and fun times, but they never disappointed their audience in terms of music – even if some bitter fans say otherwise. The Stones keep on being big, strong and unbeatable. The Rolling Stones are simply the greatest artists in human history and will never be supplanted.